The sight of a dirty environment whether at home or work can be irritating. It is not exactly a sight most people look forward to seeing. Typical reactions to a messy home or workspace can range from irritation and disgust to downright fury. However, when a dirty or disorganized environment gives you anxiety or palpitations or leaves you scared and uneasy, it’s  time to consider whether you are suffering from a phobia. The Fear of cluttered spaces also falls under this issue.

A racing heart or heavy perspiration over a messy place can most likely be a symptom of ataxophobia—the fear and dislike of messiness In the everyday scheme of things, most people may have an issue with messy spaces. A messy area can also be dirty, unhygienic, and filled with germs that could make you sick. This is something to be mindful of but becoming excessively afraid of such situations is a clear indication that you have ataxophobia.

A Phobia of Fear or Disgust?

When a little bit of disorganization causes this irrational fear, it can affect your daily life, both personal and social. Even walking into a slightly disorganized office could trigger symptoms of this irrational fear. This could, in turn, lead to awkwardness in interaction. Opportunities could be lost and relationships could fail.

Like most phobias, people who suffer from ataxophobia do not understand why they do. They try to stop themselves from freaking out about a messy desk or a crooked picture on the wall, but they can’t. The phobia can throw a wrench in the running of their daily lives.

Fortunately, it’s treatable. With the right treatment methods and a tremendous amount of willpower, you can overcome fear—even irrational ones like ataxophobia. Identifying the problem is the first step. When dealing with fear, facing it head-on is the best way.

Causes of the Fear of Messiness

When it comes to phobias the cause can be hard to determine because there may be several of them. Ataxophobia, like most other phobias, has many causes. There may have been many things one must have been exposed to, to develop the irrational fear of messiness.

You might have been conditioned classically to hate everything messy and disorganized. Most parents are stern when it comes to disorderliness or messiness. This could build up over time in a child, especially when he or she has been exposed to this kind of environment for a long time. The child keeps running away from all that isn’t organized and slowly a fear builds up. 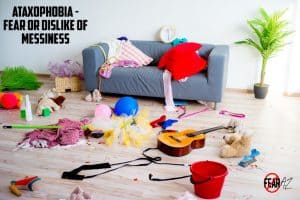 The exaggerated perception of danger associated with a messy area also helps to maintain ataxophobia. Though it might not be what started the disorder, it plays a strong part in making sure the phobia remains active.

Unrealistic beliefs held by some about the harm a messy area could bring helps strengthen the phobia. The dangers associated with a messy place are blown out of proportion. The fear then escalates, maintained by these beliefs.

If you’re suffering from ataxophobia, you’ll become excessively uncomfortable and fearful when exposed to a messy or cluttered area. The level of anxiety experienced during this time is severe. This disorder does not go away unless there is a proper and timely intervention.

Ataxophobia is different from an obsession for order. They might seem similar but differ greatly. Obsessing over order does not automatically equate to fear disorder.

When it comes to ataxophobia, you fear the messy situation rather than crave a more orderly situation. A disorderly place does not pose any harm to a person hence making the excessive fear phobic.

The fear is uncontrollable. You try to fight it, but it just seems impossible to overcome. A person suffering from ataxophobia starts avoiding places that are disorderly and messy in their mind. It is also important to remember that what’s messy for one, may not be for another. So, even a seemingly organized place might appear overly messy for the person with ataxophobia.

What Are the Symptoms of the Fear of Messiness?

The most prominent symptom of the phobia is clear anxiety when exposed to a disorderly environment. The fear triggers excessive sweating and an increased heart rate.

Psychological symptoms are not physical but occur in the mind. They are symptoms that cannot be seen but are present in the thoughts. They include:

Thoughts will center around the negative consequences of being in a disorderly area. In some cases, the longer the person is in that disorderly area the worse their thoughts become.

Ataxophobia, like all phobias, does take a toll on a person’s personal and social life. Accomplishing even minute tasks could be very hard. This could lead to other disorders as the quality of life could be greatly affected. A person with this phobia will experience great discomfort when moving out of their safe place or comfort zone. To avoid this constant and excessive anxiety, a person with such a phobia might avoid moving around altogether, which could be detrimental to their social wellbeing.

Ataxophobia should be treated as early as possible so that people can go on to lead fulfilling lives. Psychological therapy or psychotherapy is a good way to manage ataxophobia.

Talking with a mental health professional regarding your phobia can also help you identify the root cause of the issue, as well as triggers so you can take preemptive steps to control your reaction to the situation.

Exposure therapy as well as cognitive behavioral therapy are usually considered the most effective treatment methods when it comes to addressing ataxophobia or any other kind of phobia.

Exposure therapy, as its name signifies, focuses on exposing the sufferer to situations they fear with the aim of changing their response to the situation. The therapy needs to be carried out by trained personnel, and the exposure will be gradual. The idea behind this therapy is to train the mind to fight the fear.

It is done in a way that poses no harm or threat to the person. The person faces fear head-on and cannot escape from it. The goal is to become comfortable with being in such situations. The constant exposure to such situations will gradually make the sufferer realize that their fears are irrational.

While using this treatment method, relaxation is imperative. Relaxation exercises during exposure therapy help to reduce anxiety and other physical symptoms.

Phobias such as ataxophobia can greatly limit your freedom of movement and cause social problems, but it is treatable. Overcoming any kind of fear has to do with facing it head-on. So next time you walk into a dorm room with papers scattered everywhere just remember, it’s not the end of the world.