Do You Have an Excessive Fear of Firearms?

We have all have heard someone say “oh I don’t like those things” or ” move that gun away, it scares me”, but some people have a much deeper fear of guns, an excessive, debilitating fear.

Do you break into a cold sweat in the gun section at Walmart?

Do guns firing give you a horrible feeling in the pit of your stomach?

Sure, you might not be a hunter or a sports shooter but even being near guns bothers you, a lot!

You may be suffering from hoplophobia, a fear of firearms.

A Comprehensive Look at Hoplophobia – The Fear of Firearms

If cops and robbers on TV and watching news where firearms are involved cause you to lose focus and control, you may be worried about what’s happening to you. Perhaps the mere sight of firearms causes you to spiral into an unexplainable and uncontrollable panic. You may have hoplophobia. 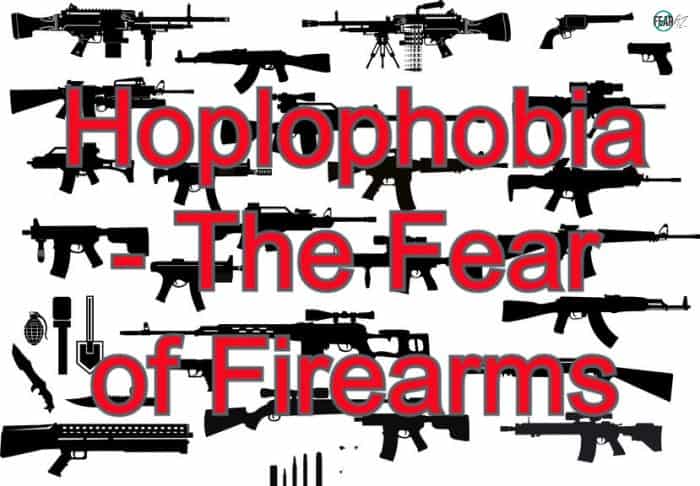 This fear can cause you to lose control of your thoughts and actions. It can be an unpleasant feeling that leaves you overwhelmed and physically drained. People around you may not know how to react to your sudden panic. Instead of being helpful, they can be quick to judge.

An Irrational Fear of Firearms

You know that firearms are a form of protection. Police authorities use them to help save and defend lives, but this doesn’t comfort you. For you, firearms trigger fear regardless of the situation.

Take deep slow breaths. Know that somewhere, someone shares the same fears as you. With the right mindset and a strong will, you can manage this condition and release yourself from this fear.

Like most phobias, hoplophobia can be caused by a traumatic experience you might have had when you were younger.
Perhaps you were shot at and survived. You may have been directly or indirectly involved in a shooting experience and witnessed death from the shooting. It’s possible you watched a gruesome and intense scene involving guns from a movie or from the news and it rattled you to the core.

Hoplophobia Can Be a Learned Behavior
The fear could also be a learned behavior from your elders while growing up. There might have been a shooting incident where a family member was involved. As a result, firearms were considered taboo in your home and consistently associated with death, fear, and unpleasantness.
Growing up, you may have had family who understood and shared the same fear as you. However, facing it alone is a different story and your fear repeatedly gets the better of you.

You might be wondering what is the definition of hoplophobia?
Hoplophobia is one of the common phobias. It’s defined as the fear of weapons, specifically firearms. It encompasses weapons like shotguns, rifles, and pistols. It came from the Greek word “hoplon” which stands for weapon, and “phobos,” which means fear.

More Than a Fear of Firearms

This specific phobia is not just limited to firearms. It can also manifest as an irrational fear of the person carrying or using the weapon. It doesn’t matter if the firearm is being used to serve and protect the innocent because once the unfounded fear kicks in, you can’t differentiate good from bad. Therefore, you find yourself focusing solely on the firearm and nothing else.

Hoplophobia causes you to fear the weapon, the one using it, and the damage and havoc it can cause. Thus, you perceive it as a destructive and deadly weapon – never as an instrument for saving or protecting lives.

Colonel Jeff Cooper, a firearms instructor, described this irrational fear as a mental disturbance because people who are afraid of firearms believe that firearms have a life and will of their own.

The symptoms of hoplophobia are the same as other phobias. There is no distinct symptom for the fear of firearms.

These manifestations are generally classified as physical and psychological symptoms.

The extent of your symptoms and what happens if you have hoplophobia are unique for every person. Additionally, the intensity of symptoms depend on the severity of your case. Some might experience physical symptoms for a few minutes while others can have a myriad of symptoms which impact their daily activities.

Most of those who have hoplophobia know that their fear is based on nothing. However, this rational perspective is forgotten once they are overcome by terror. It is a complex mental battle.
Since hoplophobia can affect one’s mental health and relationships with people, sufferers need to find the will and a way to overcome and manage their fear.