What Is Thalassophobia—Or the Fear of the Ocean?

Do you get an uneasy feeling dipping your feet in the water while sitting on the dock?

Does the thought of falling in the ocean from a boat bring on instant cold sweats?

If you experience excessive, debilitating fear while looking at or discussing the ocean you may suffer from Thalassophobia or The Fear of the Ocean.

This phobia may cause serious symptoms but is treatable, the first step is to understand why and how you have this deep rooted fear.

This is a phobia that is specifically related to a fear of the ocean and especially what lies beneath the surface.

“Thalassophobia” comes from the Greek word “thalassa” meaning “sea.” While other phobias, such as aquaphobia, cover a more generalized fear of water, thalassophobia specifically involves fearing the ocean. In particular, sufferers from thalassophobia tend to fear the ocean as deep, dark, and dangerous.

While you can see the bottom of a pool, you can’t see what lurks beneath the ocean, and it’s that fear of the unknown coupled with a fear of drowning or sea creatures attacking that characterizes typical thalassophobia cases.

It is important to note that thalassophobia is not listed as a distinct condition unto itself in the DSM-5, the manual used by mental health professionals to diagnose cases. Rather, thalassophobia is typically viewed as a “specific phobia” individuals can develop on their own. One’s natural environment—from one’s immediate surroundings to the vastness of the ocean—can be one of the most powerful influences on forming these types of formulas. 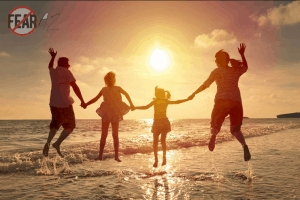 There are no official numbers for how many people suffer from thalassophobia. However, water-related phobias are not as rare as you might imagine. While not focused on a fear of the deep ocean per se, according to a Gallup poll, as many as 60 percent of Americans fear deep water in some form, while 45 percent fear water above their heads.

Cases of water-related phobias tend to be more common in women than men, accounting for near 70 percent of cases. This statistic is from a 2019 online survey based on roughly 70,000 votes. That same online poll skewed heavily toward younger people, with only 5 percent of total cases in that survey coming from patients aged 50 and above while 89 percent of cases were 34 and younger. While these numbers are not particular to thalassophobia and can extend to conditions such as aquaphobia as well, they nevertheless point to the fact that a fear of water and, thus, the ocean is more common than you might think.

As is the case with many phobias, the media may have unfortunately helped perpetuate thalassophobia. Films such as Jaws and books like Moby Dick can make attacks by underwater creatures—a key component of thalassophobia—seem horrifying and far more likely than it actually is. In reality, between 1958 and 2014 the waters around the United States were host to only 35 fatal shark attacks. 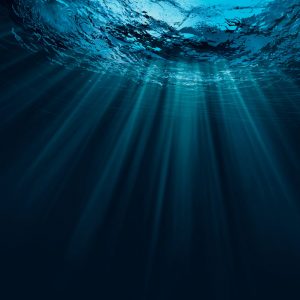 Meanwhile, while Melville describes Moby Dick as having “jaws, like enormous shears” which can rip boats in half, many whales do not have teeth—and certainly not razor sharp ones. Instead, they have baleen plates, which allow them to filter small food such as krill from ocean water. While Melville’s white whale is one of literature’s most famously enigmatic and terrifying monsters, whales are mostly peaceful. There were only a handful of cases before Melville’s book of whales attacking ships, and most of those are thought to have been accidental.

Moreover, according to the CDC, there were only 15 marine life-related deaths between 1999 and 2010 that were reported. In short, while books and films may make the ocean seem like a place teeming with monsters ready to attack, the truth is, your chances of being attacked by ocean marine life is almost negligible.

Because it is not a recognized condition in the DSM-5, there is limited information about thalassophobia compared to other more clinically-recognized phobias. As a result, there is a broader range of thought as to the potential causes of thalassophobia.

One school of thought holds that it stems in part from evolution. Given the danger the ocean must have posed to early humans and the severe lack of knowledge they would have had about it, it is possible that fear of the ocean is in part an evolutionary response acting as a survival mechanism. Fear of the ocean may have kept our ancestors from accidentally drowning.

Negative past experiences with the ocean are another commonly cited cause for thalassophobia. This can be real or fictional. A terrified response to Jaws, Moby Dick, 20,000 Leagues Under the Sea, or other media about the dangers of the ocean could lead to a more long-standing phobia. Conversely, real experience such as a near-death experience or other problem while swimming or near the ocean could cause this fear as well.

Upbringing is another potential factor. A family member who is particularly anxious about the ocean and may have thalassophobia themselves may act as a contributing force in passing that fear on to children.

Fear of the ocean can take many forms and manifest with a wide array of symptoms:

Patients suffering from thalassophobia will often go to great lengths to avoid being in the presence or even within sight of a large body of water. The prospect of being near the ocean or taking a boat out on the water may fill them with anticipatory anxiety and dread.

It is important to note that, as with all phobias, thalassophobia is not rooted in rationality. That does not mean that, if you suffer from thalassophobia, your fears are imaginary or illegitimate. Phobias and their effects on patients are all too real. Rather, the irrationality of phobias such as thalassophobia means that rationally explaining them away often isn’t enough to dissipate them.

You may rationally know Jaws and Moby Dick are fiction, and that your chances of getting attacked in the ocean are slim to none, but that doesn’t mean you can quell your immediate viscerally phobic response.

Seeing a psychologist or mental health professional is critical. They can consider your personal, medical, and psychological history and make a diagnosis. While there is no formal DSM test for this phobia, they can apply the general DSM guidelines for diagnosing phobias to your specific case. For example, if your fear of the ocean is persistent, irrational, unreasonable, excessive, intense, has lasted for six months or longer, and interferes with your ability to function, a thalassophobia diagnosis is possible.

Treatment for thalassophobia tends to follow the pattern for treating other specific phobias. Potential techniques for overcoming fear of the ocean include:

Fear of The Ocean