Are you unduly wary of people from other countries? Do you feel a deep-seated dislike towards immigrants and the idea of immigration in general? Do you lean toward laws and policies that could be uncomfortable for foreign visitors and immigrants, including those here legally?

Or maybe you justify your hostility towards foreigners by labeling them as terrorists or troublemakers.

Has it become so bad that it’s affecting your everyday life?

If you panic at the sight of a foreigner, it’s time to take a closer look at your perceptions. Your fear of foreigners may very well be the cause of the anxiety and other psychological symptoms you are experiencing.

This irrational fear of foreigners is called xenophobia and, in this case, the likely consequences affect not only the sufferer but the subject of the fear as well, ranging from unfriendliness to inflicting harm.

Unlike other phobias which you can choose to deal with or not deal with, being xenophobic is a much wider issue which carries both social and political repercussions.

What this means is that it’s critical that you work to overcome your fear of foreigners. This fear is not only unhealthy for you, but it’s unsafe for the object of your antagonism, and by extension, for your country as a whole.

As with every phobic condition, the first step towards healing is understanding the nature and origin of this irrational and sometimes hysterical reaction. 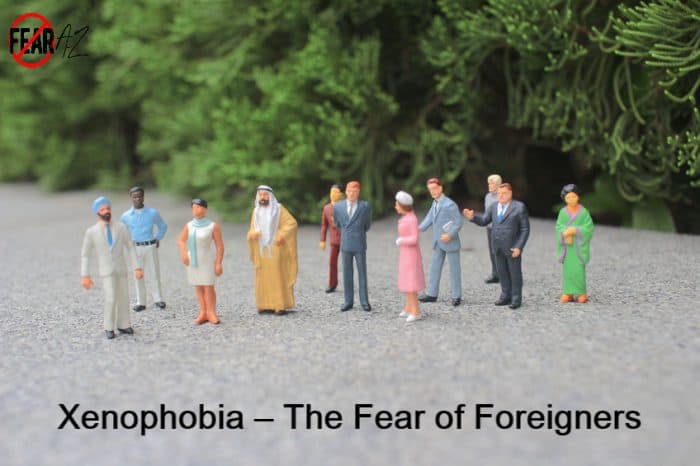 Xenophobia is the irrational and abnormal fear of strangers, foreigners, migrants, and anyone who is not an original member of a community or country. It is an illogical reaction to an exaggerated and usually made-up threat or danger. Most sufferers of xenophobia do not have a basis or explanation for their nervous hostility towards visitors, but that does not stop them from treating foreigners poorly, from the cold shoulder to outright hatred, and even physical violence or attacks.

For those struggling with xenophobia, it’s important for them to understand that their disdain is unwarranted. Whatever offense they feel that foreigners as a collective have done exists only in imagination. Now, this is not to say that foreigners never commit offenses. Sometimes they do. But that’s because they’re human—not because they’re foreigners.

The majority of xenophobics struggle to see it this way, however. They find their hostility rational and even logical, when it is quite the contrary. Xenophobia is, by definition, illogical and an emotional reaction to a perceived threat.

However malicious, unnecessary, and illogical it might be, xenophobia is still a phobia and those who suffer with it are vulnerable to all the attendant symptoms and agonies of a phobic patient.

Society often chooses to write off xenophobes as haters with a wanton dislike for strangers. The truth is that a majority of them can’t help themselves. Some even willingly admit that their fear is highly illogical and that they need help. The symptoms can affect one’s life, and no one wants to suffer unnecessarily. The good news is they don’t have to.

Your fear of strangers, foreigners, immigrants, and refugees could be a result of a negative experience with them in the past. Instead of addressing it as a standalone, you’ve generalized and pigeonholed all foreigners into a harmful category.

Over time, this shapes your views, values, and personal politics. You start to feel justified and normalize this behavior. This is especially easy to fall into.

Considering that a lot of others are xenophobic—politicians included—it’s easy to conclude that your feelings towards foreigners are valid, because other people share the same view.

First, admit to yourself that your fears are unfounded and capable of causing harm to innocent people. Be willing to take responsibility for your hatred and resolve to be a person who treats all people with dignity and respect, including non-indigenes.

Familiarize Yourself with Foreign Cultures

For you to be truly welcoming of strangers, you must learn to see them through human lenses. Read up about other worlds, values, and traditions outside of your own. Understand that the world is a much bigger, more diverse place, and strangers are a huge part of it. Learning about others’ cultures also helps you understand them better. You won’t view every unexpected thing they do as a threat or with disdain.

Train yourself to accept foreigners by showing your support for them in your political, social, and communal events. Don’t alienate them. You might even consider donating to their particular causes or attending cultural events. Such activities send healthy messages to your brain. When you socialize with them, you begin to see that they’re not a threat to you.

Do Yoga and Meditation

As with all phobias, xenophobia is a stress-inducing disorder. Calming measures like yoga and meditation work to keep anxiety in check.

The following are some methods used in treating this type of phobia with the help of a psychotherapist:

This helps reprogram the mind to rid it of harmful thoughts about foreigners and replace them with more realistic views. Through CBT, you learn to replace these hostile thoughts with good ones and recondition your mind, as well as ease your symptoms.

You learn that your past negative experience is what led to all this stereotyping and subsequent visceral reactions to foreigners. You’re given the tools needed to separate the issues and understand that being a visitor or foreigner doesn’t, in itself, make a person bad or dangerous.

Other Tips and Ideas

Take a trip to a different country and stay for a while. There, it is you who will be considered a foreigner. Note how you feel when someone makes assumptions about you based on that alone. Anyone can be a foreigner; it’s not a determinant of anything and certainly not a justification to be treated with hostility.

Don’t let xenophobia steal your humanity. Acknowledge that you need help and that you don’t want to hurt innocent people with your imagined assumptions about them. By following these tips and accepting the reality of your fear, you’ll be well on your way to becoming xenophobia-free.