The Excessive Fear of Men Phobia or Androphobia

Do you tremble at the thought of talking to men? Does being in a room full of men fill you with dread?

Does the prospect of meeting up with male colleagues or even family members cause headaches, sleepless nights, or excessive sweating? Do you find it difficult to concentrate on day-to-day activities when surrounded by men? If your answer to these questions is yes, you are most likely suffering from Androphobia.

This phobia may cause sufferers to completely cut off any social contact and avoid working at places that have male employees. Androphobic individuals stop visiting places where they would be expected to talk to men.

Since Androphobia is considered an irrational fear, it can become difficult to openly discuss their issues with someone. They might also hesitate to seek professional help, fearing judgment.
However, Androphobia is not an incurable problem. With the right help and treatment, one can overcome the phobia of men. But first, it is important to acknowledge that you have this condition. 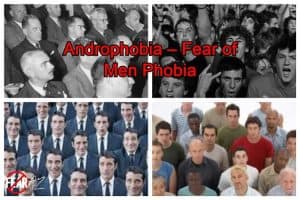 What Is Androphobia All About?

What is Androphobia? In simple terms, Androphobia is defined as the phobia of men or fear of men. People with this phobia have an irrational and persistent fear of anyone or anything associated with this gender.

The term is derived from the Greek words “andros” meaning “man” and “phobos,” meaning “fear.” Some say that the word Androphobia can be traced back to feminist and lesbian-feminist movements. In those contexts, Androphobia is a counter to the word “gynophobia,” which is defined as the fear of women.

How common is Androphobia? Although it affects both men and women, the latter are more likely to be diagnosed with or suffer from Androphobia. Moreover, younger women and girls are at a higher risk of suffering from Androphobia than older females.

If not treated, Androphobia may last for a lifetime. Phobias can affect a person’s ability to form healthy relationships and carry out daily activities.
Causes of Androphobia

It is generally believed that people who have had unpleasant and traumatic experiences with men tend to develop Androphobia. In 70% of all cases, the patient was a victim of sexual assault by a man.

Other reasons for developing Androphobia include:
● Negative experiences with men that do not necessarily indicate sexual assault
● Hearing about negative experiences with men from friends, families, or even strangers
● Abuse and neglect at the hands of men
● Seeing or reading about incidents where people, particularly women, have been abused or assaulted by men. This could include incidents such as domestic violence, assault, abduction, and killing of women at the hands of men.
● Genetics and learned behavior from family members
● Changes to the functioning of the brain
In certain societies, women and girls are forced by family members to stay away from men. This is done by limiting their interaction with males or instilling a sense of fear. Such females develop Androphobia even if they have not had any unpleasant or traumatic encounters with men. Even if they go on to have male friends, they can’t form healthy relationships because of a fear of male attention. Often, they feel scared of working with or being in the company of men.
People who are already suffering from anxiety or depression may also be at a higher risk of developing Androphobia.

Typically, an Androphobic individual will go out of their way to avoid any interaction with men. They may only visit places that only have females. Some refuse to go out at all, fearing an encounter with men.

If you choose to cope with Androphobia on your own, there are several ways to go about it.
● Begin by increasing your physical activity. Try and do yoga postures, particularly focusing on those that help to relax your muscles and mind.
● Meditation can also help to overcome Androphobia. Focus on your inhalation and exhalation, along with other breathing techniques.
● Schedule rigorous physical activity daily. Examples are jogging, brisk walking, and aerobics.
● Reduce your intake of caffeine and junk food.
● Join a self-help group. You can help each other overcome your phobias by sharing your Androphobia stories. Their experiences will resonate with you and provide the assurance that you are not alone.

If you are unable to treat Androphobia on your own, then it is best to seek professional help. A therapist or counselor will recommend methods that can help an Androphobic individual. Let us look at each of these methods in detail.

Exposure Therapy
Here, a therapist will expose the patient to things and situations that they associate with men. Gradually, they will also be asked to interact with a man or men under supervision. Such a method aims to change negative thoughts, responses, and sensations.

Cognitive Behavior Therapy (CBT)
Under CBT, a therapist uses exposure therapy along with a host of other therapeutic techniques to desensitize the patient to the things or people they are scared of. In CBT, the therapist will help you perceive your fears in a manner different from what you typically do. This allows you to cope with the physical sensations related to Androphobia.
You will also get input on how to tackle the emotional impact that Androphobia has had on your life. Ultimately, CBT will help you gain confidence in dealing with your fears.

Dialectical Behavior Therapy (DBT)
In DBT, the therapist will ask a client to control their emotions when their fears come to mind. Also known as “half-smiling,” the patient will be asked to lift the corners of their mouth whenever they think about men or anything masculine.

How Can You Avoid Androphobia Altogether?
If you are having a hard time managing your Androphobia symptoms, you may need to avoid men or masculine things completely. This could include refraining from places where there is a possibility of talking to men and staying indoors. If you are a student, you could try and enroll in an all-girls school or exclusive college rather than a co-educational institution. However, take note that these are just stop-gap measures.

Conclusion
Androphobia can be handled, either on your own or with professional assistance. Like other forms of phobia, it will take time to see results. Soon, you’ll be able to interact with men with confidence.