Remember when third grader Eliana didn’t invite you to her tenth birthday party, even though she invited everyone else in the class? Young as you were, you were most likely left with a feeling of dejection and not being wanted.

Believe it or not, you probably carried that weight for most of your life, even into adulthood. Now you may find that you’re constantly suspecting your friends of excluding you from things or talking behind your back. Sure, you have a great group of caring friends, but you can’t shake this feeling that they might wake up one day and decide they just don’t want you around anymore.

Take work for instance, when you found out the whole team went to Ziggy’s to celebrate that new lead, you curled up in your room all night crying—even though a part of you knew the only reason you were not invited was that you were sick that morning.

It sounds like you’ve embarked on a journey of self-sabotage. No matter how many times your friends reassure you that they love you and would never reject you, you’re so convinced it will happen, that you begin to reject them.

You push them away with your insecurities.

This is the perfect example of a self-fulfilling prophecy.

What you suffer from is known as the fear of exclusion, also called autophobia. It is what makes you panic at the thought of being isolated or excluded from people.

To understand this better, you first need to learn the meaning, source, and symptoms of autophobia. 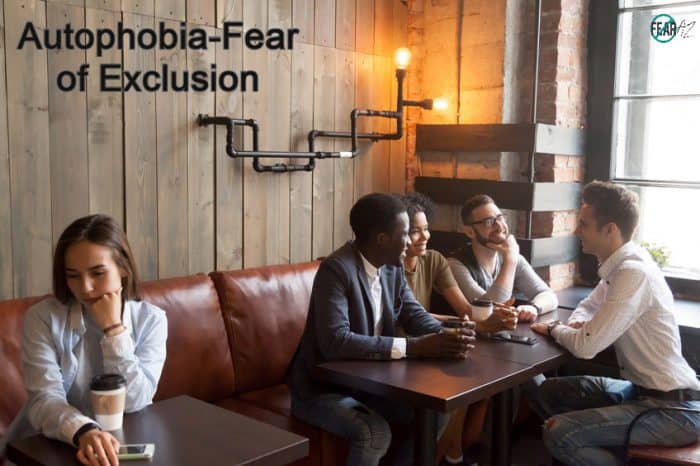 The Fear of Exclusion Explained

The fear of exclusion, or autophobia is an intense, irrational fear of being left out, alone, or isolated. This goes beyond the physical context.

A person suffering from autophobia dreads any form of exclusion or isolation from social circles and manifests very unhealthy symptoms as a result. The autophobic person cannot function outside of being a part of a group or inner circle. They base their value and sense of worth on how much people like them and want them around.

Autophobia is not to be mistaken for being extroverted; however, extroverts are more susceptible to this disorder than their counterparts. Any suggestion of rejection, or not being needed or wanted, provides an existential crisis for the autophobic.

Normal people might feel bad about rejection, but those with a phobia see it as a reflection of their value and self-worth.

Autophobia comes as a result of a person’s inability to deal with the resultant feelings of undesirability and personal deficiency that being excluded springs upon you. It’s not that the sufferer cannot do things alone. It’s that they see isolation to mean that others do not want them; therefore, they are lacking something.

Take note that humans in general, introverted or not, love to feel desired and to belong. It is a basic human need. The abnormality comes when not getting your desired inclusion causes you to exhibit signs of a panic attack, depression, and even suicidal tendencies.

The following symptoms are a result of some of the intense emotional reactions that sufferers of autophobia exhibit:

Like most phobias, autophobia usually comes as a result of incessant rejection and neglect in a person’s formative years.

Children in middle school and high school are known to be naively blunt, shallow, and brutal in their friendship choices. You could be excluded from a friendship group for something as silly as wearing glasses or needing braces.

Autophobics like you and others, internalize this rejection and go on to feel perpetually unwanted all their lives.

Also, you might have developed autophobia as a result of having to be a part of a society that is prejudiced towards a feature you have or an aspect of your personality, such as your gender preference.

Many societies are homophobic, so if you are a gay person, you might find yourself constantly worried about being rejected or excluded for being who you are.

Aside from school, parents and other family members may also be the reason for your phobia. If you grew up around neglectful parents who constantly picked your siblings over you, or made it obvious that they liked you less, your autophobia is certainly not farfetched.

How to Help Yourself with Autophobia

Seeing that your phobia could be a part of a much deeper societal issue like racism or prejudice, getting out of it might be quite a task, but there is hope.

Learning that you are innately valuable and worthy as an individual—and not just as a result of how many social groups you belong to—is not going to be easy, but it is certainly doable.

The doctor exposes you to your source of anxiety over and again in a controlled environment—in this case, being alone—until it is no longer a dreadful concept for you. The idea is to gradually increase your tolerance levels for the trigger until it no longer poses a threat to your mind or well-being.
Your mind begins to adapt and, finally, you realize that being on your own might not be the existential crises you thought it was.

Doctors also offer antidepressants, sedatives, and beta-blockers as a means of controlling the symptoms, however short term. Note that drugs are usually only a coping tool in this case, and you will still need to undergo therapy to be fully cured.

This helps you acknowledge that a majority of the problem is from your mind and how you are used to processing information. It is a faulty mindset that has you hyperventilating just because you were not invited to a party. CBT resets your thinking patterns to give you back control of your mind and emotional reactions.

Following through on these self-help suggestions, as well as seeing a qualified medical expert, would do wonders for your self-esteem and quality of life in general. You are an individual and, as much as we all love to be part of a group, it should not be the foundation of your existence. Remember, Eliana’s tenth birthday was ages ago. You are a grownup now, with lots of grownup birthdays to attend. Besides, whose to say that Eliana didn’t dislike you because your dresses were always fancier, and she didn’t want you stealing the spotlight? Think about it. . .