What Is the FOMO Meaning

Somewhere, right now, there is the party of a lifetime raging, with loads of smart, beautiful, charismatic people all having the time of their lives.

Someone in that crowd is perfect for you. You know this because you’ve sifted through one wrong date after another.

Mr. or Ms. Right awaits—surely at that party—and possibly is getting ready to meet someone else at this very moment.

Something special with someone is happening somewhere—and YOU’RE MISSING IT!

Does that bother you?

On one level, it must, after all, no one likes missing out. We only have a finite amount of time on this rock, and we all want to make the most of it. What’s more, as philosopher Jean-Paul Sartre put it, we are all imbued with “facticity” which, once set, cannot be unset.

It isn’t just “missing out” that’s scary, but the idea that, once you miss something, you may not be able to get “it” back. 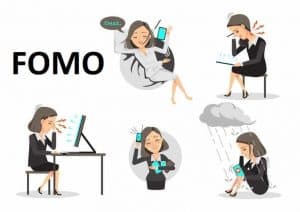 In The Great Gatsby, Jay Gatsby famously declares “Can’t repeat the past? Why of course you can!”—and dies trying, all for fear of missing out on who he saw as the “woman of a lifetime” in Daisy.

With social media magnifying life’s biggest moments and misses like never before, fear of missing out (or FOMO) is a hot discussion topic.

Let’s get right down to it: What is fear of missing out?

In terms of phobias, FOMO is an incredibly recent one. First discussed in the 90s, it has only really begun to enter the zeitgeist—psychologically and otherwise—within the last decade with the rise of social media. As we come to share our lives to a greater extent and, indeed, attempt to glamorize them, it is perhaps inevitable that we hit a wall where we feel as though someone else has or is enjoying something that we’re not.

On the other hand, the competitive drives that are behind FOMO are nothing new. Long before we were Keeping Up with the Kardashians (or poking fun at them) we were “keeping up with the Joneses”—a phrase derived from the ultra-rich New York family of which Edith Wharton was a member. If you think you’re afraid of “missing out” on the highlife now, try putting yourself in the shoes of Madame Olenska or Newland Archer being victimized by the snobby elitist “you better not miss this” culture of Old New York in the Gilded Age.

The point is that as long as we have been envious of what other people have, we have had anxiety over what we don’t have, and that helps form the core of FOMO.

But FOMO feels incredibly new as a psycho-social phenomenon, and in a way it is, in part because of how our social circles today work. While we have always placed a huge amount of importance on the formation and maintenance of social circles (again, ask Gatsby or Olenska), social media has made us more acutely aware of when we are being excluded and what we are being excluded from.

It’s not even a “hard” exclusion. On the contrary, sometimes the worst onset of FOMO comes from fearing you’re excluding yourself from fun or socially-bonding activities. On the one hand, if one were to look at the silver lining in all of this, it means that you are aware of the huge potential of bonding moments and are so engaged with your friends that you want to make sure you don’t miss out on any of them. On the other hand, FOMO can be a recipe for constant anxiety.

Friendships should be fulfilling, and yet FOMO always leaves you unsatisfied, like something’s missing. 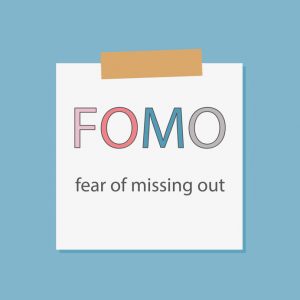 FOMO meaning stems in part from worrying that, if you miss out on these bonding moments, you’ll be at best “out of the loop” and at worst seen as “a drag” on the rest of the group, and thus be out of the loop for good, as they dump you. This can lead to anxiety, depression, and evermore desperate behavior which, ironically, can cause the very ill effects you’re seeking to avoid. After all, who wants to be the friend to the clingy, needy, negativity-spewing drag?

Who wants to hang out with someone like that?

At its worst, therefore, FOMO becomes a self-fulfilling, self-FOMO-ing prophecy.

Part of the problem of “diagnosing” FOMO is that it is at least as much if not more of a “social” phenomenon than a psychological one. Needless to say, beyond general hints of anxiety, you won’t be finding this one in the DSM-5.

That’s why you’ll instead want to turn to a bit of pop psychology via social commentary to give “symptoms” of the fear of missing out, including:

Fear of missing out anxiety is, again, social and pop psychology-based enough that you’ll certainly want to start with self-treatment. Putting down the phone and ceasing an obsession with social media would be a good start.

While that is easier said than done, sometimes the best way to halt your fear of missing out is to stop seeing what you might be missing out on. Focus on the here and now. Think of it this way: sure, there may be lots of great parties and people and events going on elsewhere—that’s an inevitability of life—but there’s so much going on here, too. You need to center yourself in the moment and come to appreciate it and yourself for the intrinsic value you and it contain.

In addition, it is worth asking yourself: Why are you so obsessed with these people and things? Why do you fear missing out on them? This is the kind of introspection that Jay Gatsby and Newland Archer needed to make, and it cost them. Both Wharton’s Gilded Age New York and Fitzgerald’s Jazz Age New York turned to a world of glitz and glamor to cover up massive problems, and their characters do the same to obscure huge insecurities and anxieties.

To treat your fear of missing out anxiety, you first need to really ask yourself: What are you so anxious about in the first place, what’s causing it, and is your fixation on “missing out” really making things better?

The answer, you’ll find, is probably not. When you stop agonizing over how you look in the mirror, you often realize everyone else is concerned about their own appearance as well. The same holds true for FOMO. Once you stop fearing that you’re “missing out” while everyone else is partying it up, you might realize their lives are hardly perfect, either.

Learning that can help you find something you’re really missing out on—the peace and prosperity you need to really enjoy life.