The Most Famous Phobia of all, Claustrobobia!

Have you suffered through endless nightmares where you are stuck in a doorless and windowless room while the walls close in on you rapidly? Do you take the stairs just to avoid getting into an elevator?

Does entering a tunnel make you shake in fear? If you find these situations relatable, then you may have claustrophobia.

While everyone around you questions your choices for taking the stairs, you know it’s the only option you have. You couldn’t bear the thought of standing in a tiny, windowless elevator.

The fear of small spaces has made life more difficult for you with all the avoiding and re-routing, and although you can’t explain your ordeal to anyone, you are tired of experiencing it.

Don’t lose faith just yet. You can overcome your fear by taking certain small steps.

But first, let’s take a close look at what’s causing it. 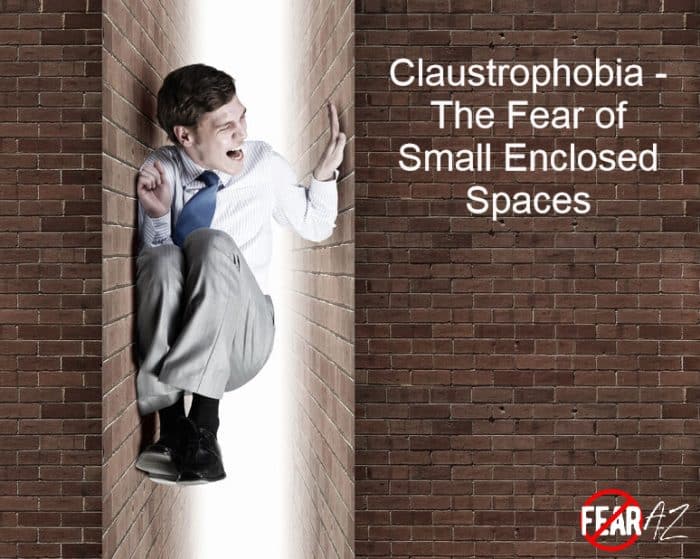 What Causes the Fear of Small Enclosed Spaces?

As with most of our fears, claustrophobia too has roots in our childhood experiences.

It could be due to that one time where you were stuck in an elevator for an hour. Or maybe the bullying you faced as a child. You could also have inherited the fear from your parents.

The fear of small spaces is also said to have been an evolutionary phobia, developed because of our instinctual needs.

The traumatic experience makes one feel so suffocated that they start to associate it with the physical sense of being suffocated. Several such scenarios could have affected your way of looking at confined spaces. The physical space or the memory of the event, whatever the cause, can become so deeply rooted in the mind that it can’t be removed even after numerous years.

This fear can create problems in your daily life and make life difficult for you as well as your family members.

The term claustrophobia comes from “claustrum,” meaning “a closed-in space,” and “phobia,” meaning fear. The meaning of Claustrophobia is much more complex and can’t simply be defined as a fear of enclosed spaces. This phobia does not have anything to do with space itself. It is more of a conditioned response to being in that space.

Fear is also an effect of a dysfunction in the amygdala that impacts the fear response in a person. People with claustrophobia will imagine the worst-case scenario and have something similar to a panic attack. The situation does not immediately cause them to panic but the imagined situation does.

Claustrophobia is a fear of situations. A situation that makes one feel out of control and suffocated, like being choked or unable to escape.

Of all the phobias, claustrophobia ranks at number seven in terms of how common it is.

Different people may experience different types of claustrophobia. Some may feel suffocated in a windowless room while others feel the same in a crowded space. As a person with claustrophobia, you are always aware of the space you are in and try to avoid entering confined spaces at all costs such as an elevator, airplane, tunnel, cave, or even a public toilet.

How Do You Deal With Claustrophobia?

Claustrophobia is an irrational fear and many people may only have mild symptoms that can be managed. But for those who are suffering from a case of extreme symptoms that are obstructing your way of life, it may be time to talk to a professional.

Remember, the best treatment is that which addresses the root cause of your phobia and not just hides the symptoms.

Self-Help – What Can You Do To Help Yourself?

Helping yourself may sound like an impossible task but trying can’t go to waste. Understanding the nature of your fear may help you gain a better understanding of it, thus helping you find a way to deal with it.

Learn to observe yourself. When was the first time you became aware of the fear? How rational is it? Is the threat real or only perceived?

Start from thoughts that are easy to tackle and then move on to the more difficult questions. Self-help is as difficult as it is successful.

Since you have a better understanding of your experiences, remind yourself repeatedly that your fear is not real. Look at situations that induce fear in you and realize how unlikely it is that they will ever happen.

Practice relaxation techniques. Try to count numbers as you take deep breaths. This helps shift your focus from the fear and keeps your mind busy. Do this whenever the fear feels too overwhelming.

Professional Help to Address the Fear of Small Spaces

Psychotherapy is the most effective here. The therapist will try to look for ways in which you can deal with the symptoms to slowly overcome the fear.

The most popular treatment used is Cognitive Behavioral Therapy (CBT). Under CBT, the therapist uses a variety of techniques to help you address negative thoughts, look at irrational beliefs and behaviors, and find healthy alternatives to overcome the fear.

Another technique used is called exposure therapy. Here, the person is put under a fear-inducing, but a non-dangerous, situation to help the person face their fears in a safe environment.

Other less drastic methods make use of relaxation techniques that teach the person to calm down and think rationally when fear-triggering situations arise.

All the above-mentioned treatments work to develop rationality around fear. The solution is simple but doesn’t apply to everyone the same. A mental health professional will have to find unique ways to help solve an individual’s fear mechanism. After all, the fear may be common but the root cause isn’t.

Learning to Cope with Claustrophobia

It is important for you to understand that these techniques, although effective, do not provide a guaranteed solution. Your fear may keep returning even after therapy. However, the techniques you learn will help you deal with the situation without panicking. Don’t go into therapy thinking it is a straight route with instant results. It is the nature of your fear and its root cause that will determine how quickly and effectively you overcome it.

Most importantly, be around people who reaffirm your belief in overcoming your claustrophobia. Family and friends are great supporters when it comes to changing one’s thought patterns.

Taking the effort to manage your symptoms, trying self-help, or seeing a therapist are signs that you are working on it. Keep in mind that you are not alone, many people around the world have some kind of fear. As long as you are trying to overcome it, you are doing good.

The best part is when you start using these techniques and notice a slight change in your response to the same situations. The fear doesn’t seem so daunting anymore. You are slowly easing into the idea of a life without fear of enclosed spaces.  And what an awesome life that is!