The Fear of Fainting, Not for the Faint Hearted

While at the mall, are you suddenly overcome with fear that you might faint when there’s no reason for that to happen? Where, because of the severe panic attack, the thought of fainting could become a reality?

Or, while on the road, out of the blue, the fear of fainting while driving kicks in. You hit the brakes and wait until the shivering ends. Again, there is no reason for you to faint — unless your nervousness gets the better of you.

You, yourself, might find what you are feeling and experiencing to be weird, alarming, and scary, and it is. And most likely, what you are suffering is Asthenophobia.

When your fear of fainting sets in, you have to stop whatever you are doing. You need to wait until the fear subsides before resuming what you were doing. Usually, as an aftermath of your fear attack, you would end up going home instead of completing the day’s tasks.

People within your circle might not understand what you feel. But it’s even harder for you to explain to them your case.

Talking about something you don’t fully understand is hard. People would understand the more common cases, such as a fear of spiders, heights, or closed spaces. But a fear of fainting is almost unheard of that people might dismiss it as an exaggeration. 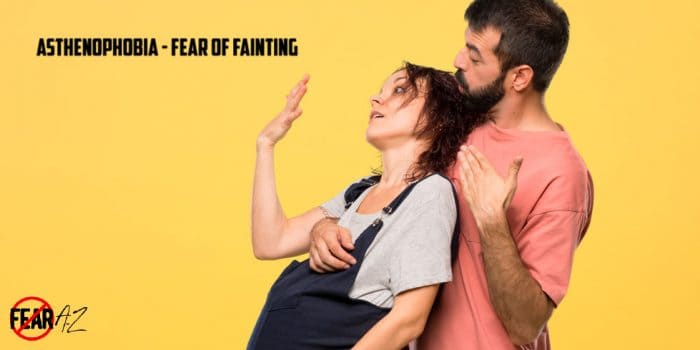 Well, people who know how phobia works will understand. And what’s more, you can control your fear and reaction to it. The path would be difficult. But knowing more about your condition and the things you can do about it will turn things for the better.

What Causes the Fear of Fainting?

Unfortunately, there is no clear cause of the fear of fainting panic attacks.

But it appears that genetics and environmental factors could play a significant role in the development of a phobia. An example is if your family has a medical history of any mental disorder specific to anxiety disorders or specific phobias. When you have household members with a phobia of fainting, you have an increased risk of developing the same condition.

Another reason would be a previous traumatic experience. For example, you or someone you know had a fainting episode that resulted in dire consequences. Ever since the event, the fear of fainting again got stuck with you.
No matter the reason, the gist is that because of your phobia, you associate fainting with extreme danger. Anytime you get triggered, you get a full-blown anxiety attack.

What is the Fear of Fainting?

Asthenophobia is considered a specific phobia. Most of the people who have this condition know that their fear is irrational. Still, when triggered, people with Asthenophobia experience overwhelming apprehension.

In extreme cases of Asthenophobia, even the mere thought of fainting is enough to trigger an attack.

All phobias, including yours, need serious attention. Depending on the severity of your condition, you can experience several symptoms, both physically and psychologically.

The aftermath of your symptoms would usually leave you overwhelmed and, at times, unable to function. That’s why individuals with Asthenophobia strive to avoid triggers of their condition. Doing so, however, results in them limiting the activities they pursue.

Here are the physical and psychological symptoms that sufferers of this phobia may experience. You’ll notice many of these symptoms — if not all — are also those that appear in other forms of phobias.

● Anger, irritability, and mood swings
● Anxiety and fear
● Confusion
● Difficulty in concentrating
● Fear of losing control
● Fear of fainting
● Feelings of dread
● Feeling sad or hopeless
● Feeling disconnected
● Fear of dying
● Fear of getting hurt
● Guilt, shame, and self-blame
● Withdrawing from others

How to Deal with Asthenophobia?

This phobia can cause you to make adjustments in your life. This condition has no fixed trigger, and you can’t schedule your panic attacks. As such, Asthenophobia is disruptive and can have an extreme impact on your social relationships.

Bananas, The Perfect Food or Your Nightmare? Do you feel squeamish while walking past a display full of bananas in grocery stores? Does the odor of bananas make you feel nauseated, are you...

Moths, Harmless Flying Insects or Your Nemesis? Are you afraid of stepping out in the summer months when moths are everywhere?- Do you avoid the yard light in summer because it attracts large...

If you have a debilitating fear, phobia, or nervousness about something—anything—we want to help. Here at FearAZ.com, we offer down-to-earth explanations, background, and suggestions to help you cope with nagging fears. We hope to present information in a non professional manner.