Fungus, Mushrooms and Mold Oh My!

Do you feel a choking sensation at the sight of the gross-looking grayish-blue fungus on your bread and two week old vegetables?

Does the sight of fungi or mold produce sweat on your forehead?

What about some mushroom soup or that delicious plate of mushroom noodles, and did we mention the salad topped with grilled mushrooms?

Does any talk of mushrooms make you nauseous or a bit ill?

You may be suffering from mycophobia, or the fear of mold, fungus, and mushrooms.

If the fear of fungi and mushrooms is disrupting your life and preventing you from meeting people or going out, it is a full-fledged phobia and not just a dislike.

While not many of us like the site of fungi or mold, certain molds and fungi are useful to use.

Life with any phobia is hard. It hampers your social and personal life on many levels.

However, the good news is that all phobias are treatable. Your fear of fungus and mushrooms can be made dormant enough to become ineffective. On this page, we will explore mycophobia causes, symptoms, and treatment. A little self-education can go a long way towards helping your excessive fear. 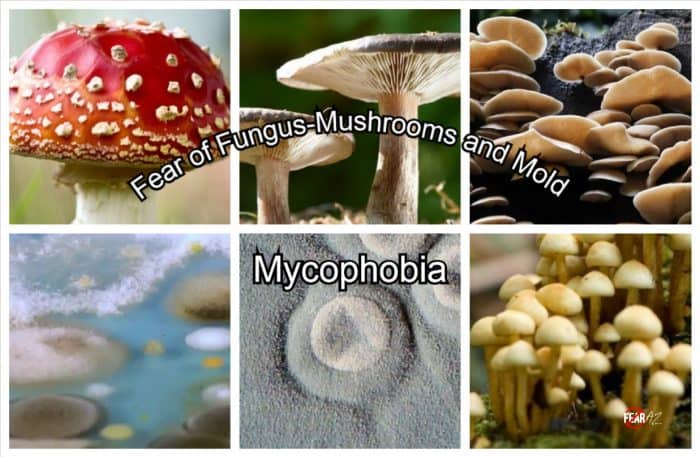 Mycophobia is the extreme fear of fungi of all kinds, including mold. The term Mycophobia comes from the Greek words “mycos,” meaning “fungus,” and “phobos,” which means “to dread or to fear.”

This phobia, or irrational fear, erupts because the individual is worried sick and terrified at the thought of getting ill from the consumption of fungi of any kind. Or even from touching it. The fear extends to all types of fungi—toadstools, mold, and mushrooms.

We associate fungi with something dirty and infectious enough to cause illness and disease, which is one of the main reasons we fear fungi.

While growing up, we learned about the dangers of eating fungi and mold. They can also invade the lungs or get into your eyes and cause an irreparable reaction. Consider this case from the year 2000. A man named Mark Takum consumed fungus by eating infected bread. It led to an infection that consumed his eyes, jaw, and nose, resulting in surgery.

A Phobia of Fear or Disgust?

A mycophobic person will avoid damp places like unused attics, bathrooms, and swimming pools. It is so because moist and dark places create the right environment for fungi and mold to grow.

There are many reasons that this fear becomes a full-blown phobia.

People with mycophobia may have seen their parents reacting extremely when they came across mushrooms or mold. This may have instilled a deep fear. In some cases, they may have experienced or seen someone close to them experiencing severe illness that resulted in death or prolonged suffering.
People suffering from OCD have also exhibited symptoms of mycophobia, as both of these conditions are closely related in their causes and symptoms.

Another playing factor is the media. It feeds into this fear via news reports and films on the dreadful effects of fungi and mold on people.

The symptoms of mycophobia are similar to those of other phobias.

How Can You Deal with Mycophobia?

Once you are aware and educated about your phobia, you can get to treating it. Like any other phobia, mycophobia has certain causes and symptoms. Identifying and treating them is possible.

Even if you do not get rid of the phobia completely, you can render it ineffective. With the right treatment, you may be able to stop associating fear with a specific trigger. However, the first step begins with you acknowledging the fear and taking immediate and necessary action against it.

Learn more about your phobia and try to analyze the irrational aspects of your fear.

Practice yoga and meditation. It will help calm your mind and ease the anxiety attacks. It will also help you gain better control over your mind and body, which will aid in your recovery and coping mechanisms.

Try talking to your friends and family who will listen without judgment. Letting out your fears will lessen the burden.

Similarly, you may also write your thoughts on a piece of paper. Later, read what you have written. This tip will help you better understand your triggers and behavior, providing better insight.

If self-help isn’t helping you conquer your phobia, seek timely medical intervention with an experienced and certified professional. They will employ various psychological methods and therapies to help you get over the fear.

As a phobia can have several causes, there are no specifically designed mycophobia treatments. There is no mycophobia test either.

Nevertheless, there are still many different kinds of treatment targeted toward the causes. These can help significantly improve many of the symptoms of mycophobia. Some of these treatments are exposure therapy, Cognitive-Behavioral Therapy (CBT), and psychiatric medications.

One of the most common types of treatment is exposure therapy. In the case of mycophobia, the therapist may begin by exposing the patient to photographs of mushrooms.

Gradually, they will expose them to a real mushroom that they can observe and touch. Repeatedly exposing them to the source of the fear will desensitize the patient to their fear. In theory, the more someone gets exposed to something they fear, the less it will bother them in the long run.

CBT works by having the therapist work with the patient to discover why they think, feel, and behave the way they do about a specific fear or concern.

Medicines do not treat phobias, but they work to ease the accompanying symptoms like anxiety and panic.

How To Avoid Altogether
It is important to recognize that phobias, like any physical treatment, can be cured by timely intervention. If you know someone suffering from mycophobia or any other form of phobia, extend help. Offer them a helping hand and a safe space to express emotions.

If you suffer from mycophobia, take your therapies seriously and never miss a session. It might be bothersome in the beginning, however, you will be motivated once you see improvement. It is absolutely possible to get back to living a normal, fun life, and go out to places, with the right help and treatment.