Pupaphobia – The Fear of Puppets is Not a Childs Game

Have you ever been gripped by the fear of a puppet coming to life?

Does the sight of puppets send a shiver down your spine? If your answer to these questions is a yes, then you might be suffering from Pupaphobia. Pupaphobia is defined as the irrational fear of puppets.

It is similar to Pediophobia, which is the fear of dolls. Pupaphobia is a ‘scary’ type phobia, as the sight or even the thought of puppets can send people into a state of anxiety or panic. If not treated, Pupaphobia can also cause people to develop a generalized anxiety disorder. Like any other phobia, Pupaphobia is treatable.

However, it’s important to acknowledge that you have it in the first place and learn all about how it works and how it should be addressed. 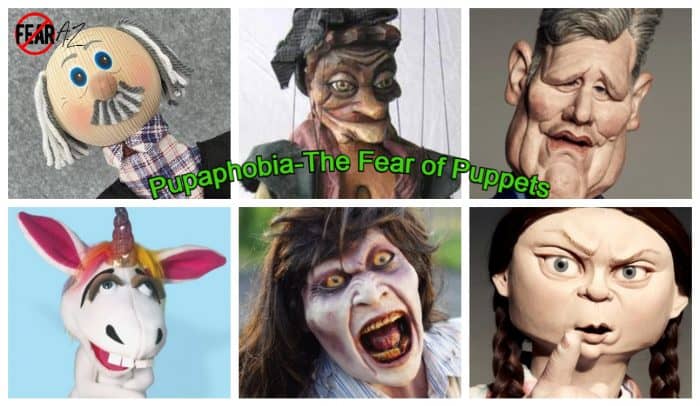 All You Need to Know About Pupaphobia

The word ‘Pupaphobia’ is derived from the Latin word ‘pupa’ meaning ‘doll’, and the Greek word ‘phobos’ meaning ‘fear’. Pupaphobia has been categorized as a form of anxiety disorder in the DSM-V and is a type of automatonophobia, which is the fear of human-like figures. Historically, puppets were used to entertain people before the TV was invented. They are also bought as toys for children and occasionally used to enact a skit or play. Nevertheless, some films and TV shows have depicted puppets in a villainous manner.

How many times have you come across a movie, where a puppet suddenly comes to life? Sounds scary right? The theme of puppets and figurines becoming alive has become a common theme in several horror movies and shows, further instilling fear in people who may have been suffering from Pupaphobia. Individuals who have Pupaphobia may believe that puppets are real and pose a danger to them. They will not only become anxious and terrified at the sight of puppets but may also have a full-blown panic attack.

What Happens When You Have Pupaphobia?

Although Pupaphobia typically develops during childhood and fades away as a person grows into adulthood, some grown-ups still carry the fear with them. Sometimes, children suffering from Pupaphobia might even start to cry or scream when they see a puppet. As a result, such children and even adults will make deliberate efforts to avoid thinking or looking at puppets. They will stop going to toy shops or even their own room if they have puppets at home. They will also refuse to take part in activities such as theatre or stage shows involving the use of puppets. While this may appear to be a defense mechanism against Pupaphobia, these acts only further enable the fear, as it continues to instill the belief that puppets are dangerous to them.

Why Do I Have a Fear of Puppets?

Pupaphobia causes can be generic and often quite vague. Nevertheless, genetic and environmental factors play a significant role in developing a phobia. For instance, a family history of mental disorders and anxieties makes an individual more likely to develop Pupaphobia. Another possible reason why people might have Pupaphobia includes watching films and TV shows that depict puppets as harmful creatures, who pose a danger to humans. As a consequence, some individuals may start believing that puppets are terrifying and have recurrent nightmares about the same, which further aggravates their Pupaphobia.

Let us take a look at the psychological and physical symptoms of Pupaphobia to understand this question a bit better:

Pupaphobia Treatment
Just like any other phobia, Pupaphobia is completely treatable. You can either seek professional help or equip yourself with a range of self-help techniques.

What Can I Do to Help Myself With Pupaphobia?

In case you might be asking ‘Can I overcome Pupaphobia myself?’, the answer is a resounding yes. If you don’t want to attend therapy or believe that you can cure Pupaphobia yourself, there is a wide range of self-help techniques that can help you do so.

According to the American Psychology Association, exercise is one of the best ways to overcome Pupaphobia. Exercises can either be in the form of a cardiovascular routine, aerobics, or yoga. High-intensity workouts such as cardio, weight-resistance training, and aerobic modalities like swimming, jogging, biking, and brisk walking, help to reduce stress.
They distract the mind from negative and intrusive thoughts that people get and release endorphins, which are the brain’s feel-good chemicals. If high-intensity workouts are not something that you enjoy, you can practice yoga. There are various yoga postures that people suffering from Pupaphobia can practice.

These poses can help to relieve some of the anxiety and panic associated with Pupaphobia, and help to direct the mind towards positive and productive thoughts. You can also practice mindfulness meditation, which helps to divert the mind from negative thoughts towards oneself, by paying attention to our breathing and the movement of the muscles in our chest and abdomen.

Professional Help
If you believe that taking external help would be useful in overcoming Pupaphobia, then seeking therapy is the best option. Typically, therapists use techniques such as cognitive-behavioral therapy (CBT), exposure therapy, and mindfulness-based stress reduction (MBSR), to treat patients with phobias.

Cognitive-Behavioral Therapy (CBT)
CBT is one of the most common techniques used in the treatment of patients with mental disorders. In CBT, the therapist helps the patient to trace the source of their phobia, analyze its causes, and explain why they have a phobia of someone or something. Further, the therapist asks their client to replace their irrational thoughts with more rational ones, and explore techniques that would help them cope with their fears.

Exposure Therapy
Under exposure therapy, the patient is repeatedly exposed to their fears. The aim of exposure therapy is to desensitize the individual to their phobias and reduce their anxiety. For Pupaphobia, patients are repeatedly shown photos and videos of puppets or imagine situations such as watching a puppet show. At the same time, the therapist will also equip the patient with coping exercises. This way, the patient will realize that the puppets are in no way harmful for them, helping them overcome their Pupaphobia.

Mindfulness-Based Stress Reduction (MBSR)
MBSR is a form of meditation therapy that is usually spread over eight weeks and is generally used for managing stress and anxiety. Usually, MBSR includes group sessions where participants are taught mindfulness meditation and yoga. Group discussions and lectures are also conducted to talk about mental health and how to overcome phobias and various disorders.

How to Avoid Pupaphobia Triggers Altogether?

If you believe that Pupaphobia is interfering with your daily activities, then it may be best to avoid dealing with it altogether. Try to avoid reading about puppets, and watching movies or TV shows that depict puppets in a negative light. You should also avoid going to toy shops and stage shows involving puppets.