Staurophobia – The Fear of Crosses or the Crucifix

Kidding aside, the fear of crosses has a historical basis. Crucifixion was an especially gruesome form of execution by the Romans.

Over 2,000 years later, some people are still afraid of crosses. Do you avert your eyes when you pass by a building with a cross? Are you terrified by movies or paintings depicting the Crucifixion? Chances are you have Staurophobia.

Overcoming a phobia starts when you learn about its causes, symptoms, and treatments. Let’s dive in. 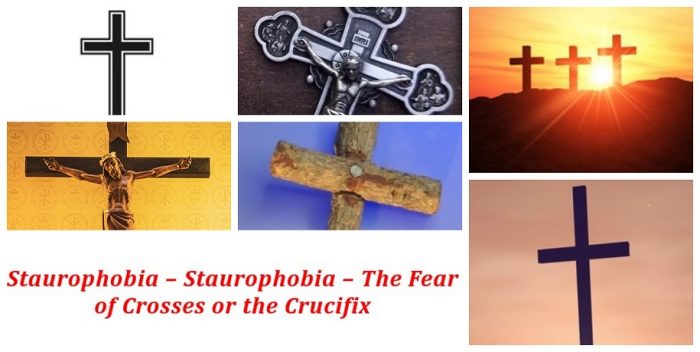 Staurophobia refers to the fear of crosses or the fear of crucifix. This term is derived from the Greek language. The word “Stauro” means cross-shaped” while “phobos” means “fear.” Is there a religious phobia? Staurophobia is sometimes associated with:
● Theophobia – fear of the Lord or fear of God
● Ecclesiophobia – fear of churches
● Iconophobia – fear of icons or fear of religious images and statues
Someone with Staurophobia does not feel disgusted or offended by a cross. Instead, the sufferer feels so terrified upon seeing a crucifix that they end up running away. Merely thinking about a cross could trigger an extreme response. Truth be told, no two people experience the same symptoms. This is because the severity of the phobia varies from individual to individual. One person might be so affected that they have full-fledged panic attacks. Another person could simply feel a little uncomfortable. Nevertheless, having a phobia is no cakewalk. Some phobia suffers report feeling disconnected from everyone. You might feel like you’re alone in this experience. You’re embarrassed by your phobia and fear that people will make fun of you, thus making it difficult to seek help.

Why Are Crosses So Terrifying?

Different people might feel differently when they look at the cross. To Christians, it is the sign of God, the sign of hope. However, others consider it a symbol of death and suffering. During the time of the Romans, the crucifixion was the most painful way to get killed. Originally invented by the Persians, the Roman Empire adopted and refined it to execute criminals and rebels. Back then, it made sense to be terrified of the cross. But why is this fear still present thousands of years later? Crosses become a focal point for Christians during Holy Week, especially during Easter. They believe that Jesus Christ died on the cross to save the world from sin. However, the way this is shown in religious images and statues can be quite gory. Traditional depictions of the crucifixion are graphic, from the nail-pierced hands to the bloody crown of thorns. Movies and TV specials also emphasize this by recreating the scourging and other punishments associated with the cross. Examples are Franco Zeffirelli’s “Jesus of Nazareth” and Mel Gibson’s “The Passion of the Christ.” It’s no wonder some people get scared.

Genetics might play an important role in making you phobic to crosses. While phobias aren’t necessarily something that you can inherit, the tendency to develop it can be passed on. If you have a family history of anxiety and similar conditions, you are more likely to develop phobias. Combine this with seeing a scary cross in church or watching one of the movies mentioned here, and it’s a recipe for Staurophobia. Also, you can get influenced by your parents or your loved ones. Maybe you saw someone terrified by crosses in childhood. That fear has been instilled in your heart and mind ever since.

Staurophobia Symptoms
Some of the symptoms the sufferer might experience are as follows:
Physical Symptoms
● Sweating and trembling
● Hot flashes or chills
● Shortness of breath
● A choking sensation
● Pain in chest
● Nausea
● Dizziness and headaches
● Fainting
● Feeling numb
● Having a dry mouth
● A rise in blood pressure
● Hyperventilation
Psychological Symptoms
● Losing control
● Anxiety
● Guilt, shame, and self-blaming
● Feeling distraught
● Disconnected from everyone
● Frightened
● Stressed
● Confused
● Having trouble concentrating
Most of the time, these symptoms happen without any warning. One second, you’re fine. The next second, you’re sweating like crazy and breathless.

Before consulting a psychologist or a therapist, here are a few methods that you can try on your own.
Define Your Phobia The first and the most important step is to convince yourself that phobias are nothing but irrational fears. You need to make your mind understand that your fear is based on something irrelevant, and it has no way of causing you any harm. Repeating positive affirmations to yourself might go a long way in this process. Who knows, if you tell yourself enough that you’re not scared of crosses, your brain might very well believe it.
Control Your Breathing
In case your brain doesn’t fall for that trick, you can try some relaxation techniques next. Breathing techniques are extremely helpful when it comes to phobias. As one of the most common symptoms of phobias is anxiety, if you control your breathing, you might be able to calm your anxiety down. You can try meditation and yoga as well. They’ll try to keep you in a healthy state both physically and mentally.
Write in a Diary
Start keeping a diary where you document your reactions to crosses. Writing things down will help you identify your triggers. As a result, you will get a better understanding of your phobia as well as keep a track of your progress. It may also help you figure out how to handle them effectively.
Change Your Lifestyle
Now’s the time to make necessary lifestyle changes:
● Sleep on time so that your body gets the proper rest.
● Eat a balanced diet so that you feed your body the nutrients it needs.
● Start exercising regularly, especially cardio routines.
You need to be physically and mentally healthy to be able to combat this phobia.
But what if these tips don’t work?

Are you looking for professional Staurophobia treatment methods? In case you still have trouble despite trying these techniques, consult a doctor or therapist. Before you begin with any treatment, you must be diagnosed so make sure to take a Staurophobia test.
Cognitive Behavioral Therapy
Also known as CBT, this is a common form of treatment when it comes to phobias and anxiety disorders. CBT works on the concept of the sufferer fully understanding the phobia. It helps sufferers comprehend why they think, feel, or behave a certain way when crosses are brought up.
Exposure Therapy
In this form of therapy, the therapist slowly but steadily exposes the sufferer to their phobia. Initially, they might show you pictures of the cross. Eventually, they give you a cross to touch and feel and note how you react to it. This repeated exposure is meant to desensitize the patient to their fear.

Coping With Staurophobia
Some phobics cope by completely avoiding all triggers. This means you’ll have to make sure to avoid seeing churches, religious movies, or anything that resembles a cross. Sounds impossible? That’s because avoidance can only get you so far. Following the methods mentioned above should go a long way toward managing your Staurophobia symptoms. There is no guarantee that you’ll completely get over your phobia of the cross, but you can alleviate your reaction to it. One way is to share your experience with someone you trust. Dealing with a phobia alone can be exhausting. Seeking help and support from loved ones can turn things for the better.

Different people feel differently towards the cross. While some are scared of it, some believe it to be holy and a symbol of hope. Hopefully, reading this article will help you lead a productive life despite having Staurophobia.