Zeusophobia or the Excessive The Fear of God or Gods

Did you know that this is one of the few phobias that come from the name of a person? Zeus might be fictional, but the extreme fear he inspires is quite real. Are you terrified by the existence of a god or gods? Do you live in fear of being punished for your sins? Do you dread the thought of going to church? You may have Zeusophobia, an extreme phobia of god or gods. Be assured that no matter how irrational this fear is, you can recover from it Let’s take a closer look at its causes and the available treatments.

If you’ve ever wondered what phobia is the fear of God, then you’ve come to the right place. Zeusophobia is derived from the Greek name “Zeus,” who was the king of the Greek gods in Olympus. The word “phobos” means fear. Zeusophobia may manifest both as illogical fear and severe disgust. Some people have an aversion to anything related to a divine power or religious affairs. Since you find them offensive, you want nothing to do with them. Others live in terror of deities. They feel that they incur the anger of the gods because of their behavior. In many cultures, religions enforce law and order. These laws keep people from actions or ideas that the gods consider forbidden. Take note that Zeusophobia is not the same as Ecclesiophobia, which is an extreme fear of the church. Another related condition is Theophobia or God phobia, which is rarely talked about. However, it is widespread. 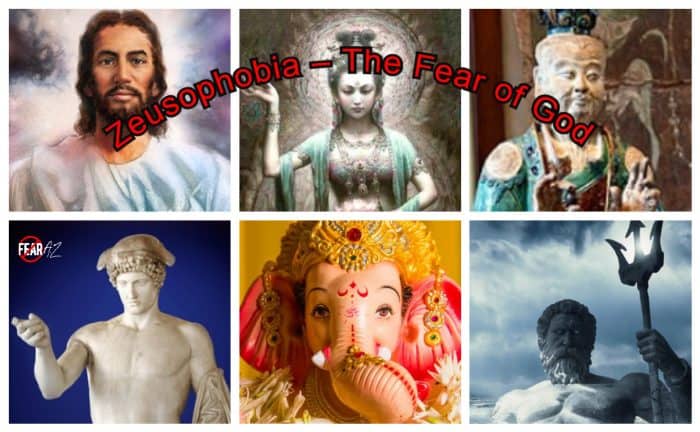 Zeusophobia Causes
Most social anxiety disorders or phobias are not triggered by a specific cause. The intense fear of God and religion is no different. Religions are different in what they believe and stand for. They do have one thing in common: a deity or pantheon is usually involved. Most religions have a god who punishes sinners with everlasting fire and forgives when sinners repent. There is also a lot of belief surrounding eternity. Where do people go after death? Will people meet after this life and still know each other? Religion tries to explain what happens to people who have passed away. While this may comfort some, the idea can be quite frightening to contemplate for people with Zeusophia.

Childhood Religious Instruction
Why have you developed god phobia? Look back at what you learned when you were young. Christians attend Sunday school classes while Catholics are taught Catechism.
The teachers always pushed for the existence of heaven and hell. Heaven was purported as excellent and full of love, angels, and God himself. Hell was presented as a place of torment and doom.
Each child who behaved right was commended and told that they would go to heaven. Everyone else whose behavior was unacceptable was reprimanded. These “sinners” were told to change unless they wanted to go to hell and burn forever. Could it be that you took these Sunday school lessons a little too seriously?
Traumatic Episodes
Have you ever lost a loved one? As a child, you were probably told that God took your family member away when they died. For a child, this does not make sense. Most religions present God as a loving being who gives whatever his followers asked of him. It can be hard to digest that this same God took away a loved one. You may never come to terms with it. You probably began hating God, religion, and everything linked with these two. You have never “forgiven” God for taking away your loved one.
Committing a Sin or Crime
Maybe you committed an act that’s considered evil by your faith. You may have stolen from someone or cursed God.
To this day, you live with guilt and self-condemnation. You feel like you were not forgiven for the sinful act and never will. In addition, you fear being punished by the higher being.
Genetics
You could have inherited the fear from your parents or extended family. Perhaps there is a history of mental illness in your family or anxiety disorders. If you can establish there is such history in your family, work around that. If you have social anxiety disorders, you are more likely to develop Zeusophobia. Do you also have Obsessive-Compulsive Disorder (OCD)? People who suffer from OCD are more likely to suffer from phobias, including Zeusophobia.
Symptoms of Zeusophobia
Signs that show you could have a fear of gods phobia are divided into physical and psychological. If you have seen any of these physical signs, you could have Zeusophobia.
Physical Symptoms
● Social Withdrawal
● Increased heartbeat when interacting with people
● Avoiding the topic on god and religions
● Sweating profusely while in church
● Avoiding going to Church or religious meeting places
● Easily angered
Psychological Symptoms
● Uncontrolled anxiety whenever you think of God
● Intense fear of god and religion
● Feeling unworthy
● Experiencing guilt, sadness, and shame
● An intense feeling of hopelessness
● Lack of Concentration
● Being obsessed with sense like the world is coming to an end
● Having mood swings
● Anxiety when you are supposed to attend functions like weddings
Although irrational, Zeusophobia patients may experience panic attacks from time to time. In the worst of cases, a patient may require hospitalization.

Self-Help Practices for Zeusophobia
While there are professional Zeusophobia treatment methods you can explore, self-care tips are practical as well. Before talking to a therapist, research what you can do by yourself and for yourself.
You need to understand that anxiety is emotional and overreacting. Fear stems from a specific trigger, and whatever triggered your fear is, that is what you need to look at. Beliefs, ideas, and opinions are not necessarily facts.
Start by forgiving yourself. Many religions teach on God’s forgiving nature. Ask for forgiveness from God according to your religion’s practices and beliefs.
Talk to Someone You Trust
Whether it is a family member or a friend, confide in someone. Say everything as it is without fear. This means you have to talk to someone who won’t listen to answer back or judge. Talk to someone who will listen to understand. The problem solved is halfway solved.
Seeking Professional Treatment
Professional treatment incorporates a mix of therapy and meditation.
Cognitive Behavioral Therapy
Cognitive-behavioral therapy or CBT works to alter thought patterns and beliefs. A therapist will walk you through changing your thinking and pre-existing ideas. It may take time, but progress is progress, no matter how little.
Negative thinking patterns give rise to opposing responses. Positive thinking patterns result in positive responses.
Mindfulness Meditation
Mindfulness meditation is applied in Dialectical Behavior Therapy (DBT.) In DBT, coping skills and treatment options are explored and shared. Mindfulness meditation is applied in a group setting by getting fear of gods phobia patients out of their comfort zones. Meditation practices include relaxation techniques and positive reinforcement. Group members may focus on something as simple as drinking warm tea. While on it, they will be required to focus on the tea’s smell and taste.

How to Avoid It Altogether

Try as much as you can to work on your god phobia by yourself. You alone understand what you really feel and go through. Please understand that beliefs, opinions, and ideas are not necessarily facts, no matter how popular and widespread. Fears affect your social life, well-being, and productivity. Realizing that a barrier has been placed in your life by an irrational fear should activate you into working to change.

Religion is not inherently bad. It continues to advocate virtues and reject vices. The roles religious organizations play in our society cannot be overlooked. Such responsibilities include peacekeeping operations and calling out the government for unfair treatment. Simply put, religion and the idea of a higher being keep individuals and society rooted, While religion is good, too many anxious thoughts about it are unnecessary. Phobia of god-like figures is not the same as the usual fear of a god. Seek to explore the truth from religious books about how far your religion goes and how to live with it.