The Fear of Crowds: It’s More Than You Think

It is remarkable how in the span of a few short months the sight of crowds has taken on a whole new meaning. Where crowded city streets used to be not just a way of life but, indeed, a sign of liveliness, in the midst of COVID-19, streets are empty and where crowds exist, so too does fear.

A fear of big crowds is no small thing, so let’s take a closer look at the fear of crowds and see what’s behind it. 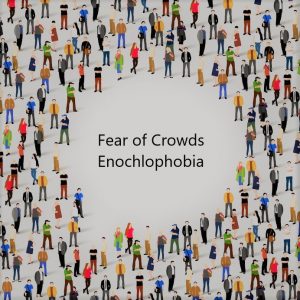 What’s in a Name?

First and foremost, it’s important to establish that a fear of crowds may not mean what you think it means. Many people tend to associate agoraphobia with a fear of crowds, and while there may be some overlap there as we’ll see, the technical term for a fear of crowds is enochlophobia.

The difference between the two may be seen in their names. “Ochlo” is the Greek word for “crowd,” while “agora” is the Greek word for “market.” As such, agoraphobia is actually the fear of feeling trapped, humiliated, or otherwise anxiety-ridden in open yet confined places, like marketplaces. There are likely to be crowds in places such as these, adding to and perhaps triggering your fear of being trapped or humiliated, but it isn’t the crowd yourself of which you are afraid. By contrast, enochlophobia is the fear of the crowds themselves.

This quibble over what a fear of crowds is called isn’t simply semantic or syntactic. Returning to our COVID-19 example, if what makes you fearful of large crowds is the prospect of catching the virus, you probably don’t have a fear of crowds phobia, at least not in its own right. On the other hand, if you would be afraid of crowds no matter what and have been since before this pandemic began, your chances of having something akin to enochlophobia are far greater.

Causes and Symptoms of Fear of Crowds

All of that is well and good, but what does that actually mean for those who suffer from a fear of big crowds in their own right?

Some generalized causes for enochlophobia typically include forms of personal trauma. If you have had an exceptionally bad experience with crowds in the past, that may be the catalyst for the formation of a phobia such as enochlophobia. This trauma can take several forms. Maybe you were in a crowd when something bad happened, or maybe you watched or heard about something bad happening in a crowd to someone you cared about, or maybe you had overprotective parents who instilled a fear of large crowds in you from the beginning.

Again, these tend to vary from person to person, nailing down specific causes which can apply to most or all cases is very difficult.

Common symptoms of enochlophobia that most sufferers tend to experience in some form or another include:

According to online polls , near 90 percent of those responding who say they had enochlophobia were 35 or younger, while over 63 percent were women. There may be a correlation from factors such as rape culture making women feel less safe in public spaces, or that men tend to have more of a pack mentality.

The symptoms listed above do have a lot of overlap with agoraphobia, and again, the two are often related if still separate conditions.

There are several conditions related to enochlophobia that may impact your experience with it, including:

The first two are essentially even more highly specific versions of a fear of crowds, while the latter two touch on different types of phobias that may have considerable overlap with enochlophobia.

As a highly particularized phobia, a fear of crowds is something for which you may be asked to undergo self-treatment. In some situations, you are the best person to help yourself, and this is one of them.

There are a wide range of effective self-treatment options for enochlophobia:

Professional Treatment Options for the Fear of Crowds

If these treatments aren’t helping or you feel you need further guidance, see a mental health professional. They can prescribe a wide range of treatments, from cognitive behavioral therapy (CBT), which works to rewire how your brain associates certain ideas (in this case crowds), to exposure therapy, discussions and possibly even medications, though the latter is far less common.

You are not merely a face in the crowd. Your fears, phobias, and feelings matter, and with the right approach, you can conquer your enochlophobia.