Glossophobia, or the Fear of Public Speaking

Glossophobia is the professional psychological term to describe the fear of public speaking. The word takes its root from the Greek “glossa” which means “tongue.”

It is important to distinguish between glossophobia and a simple dislike of public speaking. Many people are shy, or introverts who don’t like getting up in crowds or giving speeches or presentations in public. While this is all part of glossophobia, the condition is marked by not merely a dislike for these activities but an active, sustained viscerally phobic reaction to it. 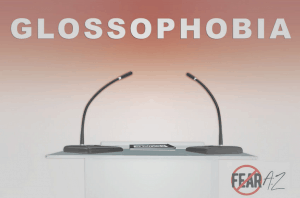 Symptoms are what distinguishes glossophobia from simple shyness or not wanting to speak in crowds. Shyness is simply an aspect of one’s personality. It generally doesn’t cause severe symptoms. Glossophobia, on the other hand, can be characterized by several mild to moderate and even potentially severe symptoms. Some of the possible symptoms of glossophobia are as follows:

What Causes Fear of Public Speaking?

There are many suggested causes of glossophobia, one of which being that it is partially evolutionary in nature. When we are afraid of something, our autonomic nervous system indicates that we are in a potentially dangerous situation and activates a fight or flight response. Obviously with something such as public speaking, “fighting” someone or something is not really an option, which leaves “flight,” and the overwhelming desire to exit the situation altogether.

Either way, the nature and strength of the arousal of the fight or flight impulse leaves those with a fear of speaking in public with an inability to speak comfortably in front of audiences. 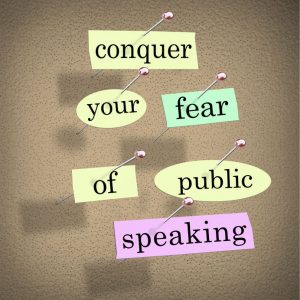 Finally, there is also not just the fear of public speaking but—to paraphrase Franklin Delano Roosevelt’s famous speech—“fear of fear itself.” Those who are already genetically predisposed to anxiety can be fearful of the physical and psychological effects that those conditions and responses may trigger, which in turn can intensify their anxiety and overall condition, including as a public speaker.

Additionally, there are mental and attitude-related causes of a fear of public speaking that can trigger or exacerbate the issue.

For one thing, one’s beliefs about public speaking can impact and exacerbate these fears in a catastrophizing fashion. By imagining that public speaking will be something that will lead to a panic attack, humiliation, or some other catastrophe, those with public speaking phobias can incur some of the symptoms that are characteristic of glossophobia.

This often occurs when people overestimate both their own shortcomings as a public speaker as well as the stakes or dangers associated with public speaking as a whole. By imagining themselves as a horrible public speaker, for example, who is sure to be mocked and their lives ruined as a result, those with glossophobia can create a feedback loop of fear for themselves from which it can be difficult to escape.

Some psychological iterations of this view also pose a distinction between performance and communication orientations. Performance orientation indicates that the subject views public speaking as a skill that is so specialized and rarified as to be impossible for them.

If you imagine that public speaking is exclusively the realm of Shakespearean and Oscar-winning actors and skilled silver-tongued politicians, for example, you may be more prone to think that you could never possibly meet those standards and are thus doomed to failure and mockery.

Communication oriented views of and anxieties toward public speaking, on the other hand, focus on the content of the speech rather than its style. If you do not think your ideas are communicable, or else fear they are not “worth” communicating, the anxiety stemming from giving a public speech may be greater.

Continuing the search for public speaking fear facts, symptoms, and causes, there are situations that can make the prospect of speaking in public seem even more terrifying or impossible.

For example, if a subject lacks speaking experience and is tasked with giving a speech in public for the first time, the request can feel overwhelming. You can feel as though you have no personal experience to prepare you for this moment, and are thus more prone to imagine the worst. 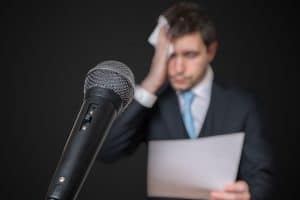 Situational causes can also heighten other existing anxieties. If you already have social anxiety about how you perceive your social status to be different from others, you may fear that that difference will be heightened and your disadvantaged state made more apparent by speaking in public. Likewise, the fear of humiliation can also seem all the more terrifying when you feel that it will impact your social status even more acutely.

As human beings, we often fall back on pattern and familiarity. The newer something is, the more off-putting it can seem to those who suffer from different anxieties. If you are tasked with giving a speech on a new topic with which you are not very familiar, or are asked to speak to a new audience at work or in public whom you do not know, the fear of the unknown can exacerbate your glossophobia.

While not everyone who suffers from one suffers from the other, there is an overlap between a fear of public speaking and a broader case of social anxiety. It is important to note that Social Anxiety Disorder is a recognized psychological condition under the DSM-IV and is qualitatively different from simply being “shy,” “socially awkward,” or simply not liking social gatherings. For sufferers of SAD, social interactions such as public speaking can be so overwhelming as to leave them with crippling symptoms such as sweating, rapid heartbeat, panic attacks, or vomiting.

Glossophobia is a very limited subject of this phobia. Those with glossophobia share and exhibit some of the same symptoms, but only tend to exhibit them when confronted with public speaking situations, rather than in all cases they are asked to speak or any time they are in public.

One of the most difficult aspects of glossophobia is the fact that, for most of us, public speaking isn’t something we can entirely avoid. Many jobs involve giving presentations or speeches in some capacity at some point. Even if you aren’t performing these presentations solo, simply being expected to speak and take part in them can cause distress for glossophobia sufferers. This can mean that your phobia can put you at risk of stifling your career’s progress, or even potentially losing your job altogether.

How to Conquer Fear of Public Speaking

How overcome fear of public speaking? One of the most effective ways to treat glossophobia is to rethink how you think about it, and that’s what Cognitive Brain Treatment (CBT) is all about.

Fear of Public Speaking Facts. The good news about glossophobia is that, while it may be more common than other phobias, it is also generally regarded as more easily treatable as well. When it comes to figuring out how to overcome fear of public speaking, the most common form of everyday treatment is remembering and enacting action steps recommended by your therapist. Some common action steps include:

For comparison’s sake, while as many as 75% may experience some form of anxiety while speaking in public, the number of actual glossophobia sufferers is unclear. Nevertheless, a general fear of public speaking is extremely common. A 2000 study for European Psychiatry sampled 2,500 citizens of Sesto Fiorentino, a suburb in Florence, with subjects asked a series of questions about their greatest fears. The most common fear reported was public speaking at 89.4%.

Furthermore, while an estimated 5%-9% suffer from some form of Social Anxiety Disorder, how many of these may also suffer from glossophobia as a subset of that phobia is unclear. 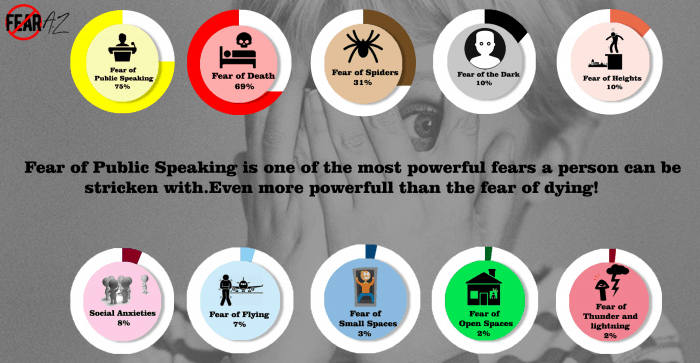 There is evidence to suggest that women may suffer from glossophobia more than men. A 2018 study done by the University of Karachi surveyed 63 male and 63 female students on the act of public speaking. Of the female respondents, 20.6% said that they experienced a high level of fear over the prospect of public speaking, while only 6.3% of male students responded as such. Of the female students, 41.3% reported their anxiety as moderately high, and 38.1% reported it as moderate, compared to 33.3% and 28.6%, respectively, for the male students. Most startlingly, not one of the female respondents responded that their anxiety levels were moderately low, while a combined 31.8% of the male students did.

This squares with other research that shows women self-reporting as fearing public speaking more than men. However, these fear of public speaking statistics should be understood within the greater framework of psychological and social trends. For one thing, women are statistically more likely to self-report for many psychological phobias, the whole “men keep their feelings in” mantra. For another, it should be noted that these studies simply account for a statistical difference, but do not rule on the cause of that difference. For example, women can often face a great deal of abuse online and in person when they attempt to speak out. Fear of sexist hostility, threats, or violence can stifle women’s ability to speak without fear of reprisals, causing them to “fear speaking in public” without necessarily having clinical glossophobia. 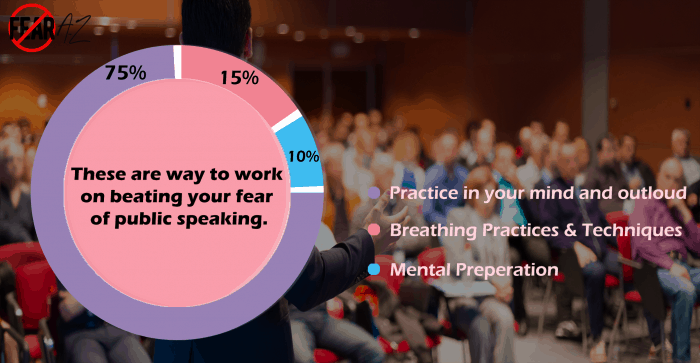 Feel free to cite our statistics and use the infographics, please link back to FearA-Z.