Fear of Clowns, Not Funny for Some

What is the fear of clowns called? A fear of clowns, or technically speaking, coulrophobia, is a phobia that involves a deep fear of clowns. In order to better understand this very real phobia, let’s begin with a little history of clown culture. We’ll start with the more humorous side of things then delve into how these comical characters took a turn toward the dark side.

The earliest clowns reach back to the Fifth Dynasty of Egypt or 2400 BC. The first clowns were African Pygmies known as Dangas, whose purpose was to amuse the royal families. Dangas dressed in animal skins and masks and would dance to imitate the Egyptian gods. 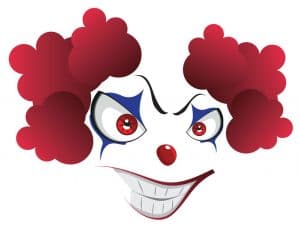 The Greeks, Romans, and Chinese also used clowns for entertainment and religious purposes. There is actually a vast history of well-known clowns from many different centuries, countries, and civilizations.

The word “clown” was not used until the sixteenth century. Clowns, for the most part, were made up in ways to spread happiness and laughter, such as the circus clowns first seen in the 1800s. In more modern times, clowns have been used for festivals, birthday parties, and any event where a lighter side is needed, especially for children.

Along the way, however, clowns developed a contrasting and unsettling persona. Society realized that a clown could be scary if made up to look so, and that’s when the phobias may have begun. There have been true-to-life scary clowns including the serial killer John Wayne Gacy, and of course many scary movie clowns such as Pennywise from the adaptation of Stephen King’s novel It, the famous Joker from the Batman franchise, and the even more creepy Violator from the movie Spawn.

For the most part, the fear of clowns, or coulrophobia, has not been a mainstream phobia like that of claustrophobia or arachnophobia—not until recently anyway. In 2016, an outbreak of scary clown sightings dubbed as the Creepy Clown Epidemic swept the nation.

Individuals in scary clown masks or fully painted faces appeared at random to terrify communities from Wisconsin to California. These menacing clowns stared at unsuspecting civilians or might even chase those who were foolish enough to run.</p.

Many urban legends were born from this devious pastime. Some clowns were arrested, and some themselves were chased and beaten by angered victims of their pranks. Those dressing in frightful fashion were clearly attempting to feed on the fear of clowns. This dubious urban fad may have passed, but the damage was done for many.

From movies with fearsome clowns to strangers dressing up for your nephew’s fifth birthday party, seeing a clown can trigger coulrophobia for some. But what causes this extraordinary fear?

Psychologists claim for the majority of coulrophobia cases the fear comes mostly from childhood events that are imprinted upon the mind or are what is called a learned fear.

Children are very susceptible to being frightened by new faces. Accentuated facial features such as a large, red nose, big red lips, or white, ghostly skin only compound this innate fear. Seeing a harmless, well-intentioned clown as a child may have caused a deep rooted fear of them. Perhaps it was a clown encounter at the funhouse or a well-done Halloween costume that has stuck in the mind. Any of these examples could have been the catalyst which brought about a fear of clowns.

Physical and Psychological Symptoms of Coulrophobia

Physical and psychological symptoms of this phobia include but are not limited to the following:

● Profuse sweating
● Nausea and/or vomiting
● Feelings of dread
● Increased heart rate
● Crying or screaming from fear
● Anger or agitation from being near a clown
● Shortness of breath
● Nightmares
● Anxiousness, anxiety or a severe panic
● Shaking from fear

Managing these symptoms are one way of dealing with your fear of clowns, but you can attempt to overcome the phobia by going a bit deeper.

Cures or Treatments for Coulrophobia

Psychotherapy with a licensed professional is one method of working to overcome your fear of clowns. This therapy may include exposure to phobia triggers or standard cognitive behavioral therapies (CBT). CBT is a method of treatment for phobias which helps you change the way you view your fears and triggers. This may help you manage the fears and anxiety more effectively.

Exposure therapy treatment is another method of working to overcome the phobia. This method involves being introduced to triggers and items that may cause the fear, but doing so in a controlled environment. This is a form of mental practice by facing the fears and learning to cope with them.

Certain medications used in conjunction with therapy are sometimes prescribed. Anti-anxiety medications, sedatives, or beta blockers work to slow your heart rate in instances of intense anxiety. The combination of medication and psychotherapy may help you overcome your fear. NOTE: All medication must be prescribed by your health professional.

Self-Help Practices for Fear of Clowns

● Self-relaxation exercises
● Meditation
● Breathing exercises
● Befriend a clown; become familiar with his or her art form

Having a fear of clowns does not make you strange. People are all different and we all have our own fears and dislikes. Remember, you are not alone in fearing clowns. For instance, Johnny Depp, who has dressed up similar to a clown, has a fear of them. Even Daniel Radcliffe, aka Harry Potter, is known to shy away from clowns.

Recognizing that you have this phobia is the first step in working to overcome it. Once identified, you can then begin to limit the negative effects coulrophobia has on your life. For many, clowns are not the fun of oversized shoes, a red honker, an enormous orange wig, jokes, or goofy gags. We’re not clowning around when we say they are known to represent a serious fear and can cause real anxiety. If you take this fear head-on and work through it, you can get back to seeing clowns as the pure, simple entertainment they were meant to be.

The Fear of Clowns or Coulrophobia