You can Change Your Fear of Change

Change happens every second, minute , hour and day. Change is inevitable, but image being terrified of change to the point of physical and psychological ailments? Some people suffer from extreme fear of change. There is hope through education and if needed professional therapy, let’s discus.

People talk about “hope and change” and “change is good.” And of course, musicians love singing about change, from Bob Dylan’s “The Times They Are A-Changin’” to Sam Cooke’s “A Change Is Gonna Come” to David Bowie’s “Changes.”

But what if change terrifies you? What if changing times, a change to come, or the very thought of change sends you into a panic? We all fear change at some points in our lives, but what if any change seems like a terrifying attack from which you must shield yourself and shut yourself away at all costs?

Chances are you have some form of a fear of change.

Still, that’s pretty broad, so what is the fear of change called, how we can understand it, and what steps can you take to overcome it?

The fear of change is known as metathesiophobia. That being said, while it’s always helpful to be able to give a label to one’s fears, in this case that doesn’t necessarily bring us much closer to being able to take tangible action against it.

That’s because, like many broad popularly labeled phobias listed on the Internet, metathesiophobia is not recognized as a distinct psychological condition by the DSM-5. Instead, it falls under the purview of a general anxiety disorder. General anxiety is an umbrella term under which all of these individual, more specific diagnoses fall.

In essence, if you have general anxiety, you’re likely to have many of the symptoms listed below, just focused on something other than change specifically.

The cause of this condition is likewise elusive. There are any number of potential triggers for general anxiety, and just as many if not more for being anxious about change, some of which may be beyond your control. For example, if you have a mental illness or learning disability such as a form of autism, you may “feel” change very acutely and thus fear it for reasons which are both genetic and yet beyond the comprehension of others who don’t have that condition.

In addition, human beings are naturally resistant to change to some extent. Our brain, shaped by tens of thousands of years of evolution, interprets a predictable, “stable” condition as safer than an unpredictable, “change-based” one. If you’re a hunter-gatherer and you know that one part of the plains is free from potential predators, you may feel compelled to stay there instead of changing locations and risking getting eaten.

Of course, that’s the dilemma with fearing change—if you never embrace it, almost nothing ever changes, and change can be a good thing. That’s why we no longer hunt with stone tools, but rather, we sit in air-conditioned rooms with iPhones in our palms.

On the other hand, you may have had a particular incident in your life where something related to “change” went wrong, and now you’ve taken that to the extreme. Again, such a fear is so broad as to be almost impossible to nail down on its own.

This is also why fear of change statistics are so hard to come by. Not only is being phobic about “change” extremely hard to define, but the lack of definition makes it hard to quantify and thus measure in a controlled scientific, statistical study.

In the end, fearing change defies statistical analysis and is instead highly personal.

That’s why it is so important to speak to a therapist in a one-on-one session to give shape to what may otherwise be a vague, shapeless, terrifying fear of any form of change. The more you can define the condition rather than just “fearing change,” the more likely tangible action to address that phobia becomes.

The most common psychological symptom of this phobia is a persistent, excessive, and irrational fear-of-change anxiety. That said, not every fear is a phobia. As such, two or three of those factors need to be present for your fear to be properly considered a phobia.

Persistency means that you don’t just occasionally fear change, but rather you think about, fear, and obsess over it constantly. If you’re just occasionally worried about change, or only worry about a very specific change (e.g. getting ready to give birth, major changes to your surroundings, a new job, etc.), then chances are you don’t have this phobia. 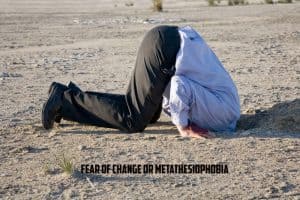 The degree to which you fear change is also essential. There’s a big difference between being worried about home renovations and being so anti-change that you keep your home the same for decades and get upset if anything is moved even a few inches.

And make no mistake, there are changes where at least mild fear and anxiety is a rational response. We’re living in the middle of the COVID-19 pandemic, and given how radically it has reshaped our lives, being at least a little anxious about that is understandable. On the flip side, if you’re afraid that the most basic change to your life means that you’re sure to die, chances are your fear is irrational and trending towards a phobia.

Just as there is a huge range of variation as far as the psychological component is concerned, there are many potential physical symptoms of change. That said, most tend to be control- or anxiety-oriented.

Fixating on controlling every aspect of your appearance down to the tiniest detail can be a sign that you suffer from this condition.

Other physical conditions are likely to be rooted in symptoms associated with general anxiety disorder, which include the following:

The question of how to overcome the fear of change is a multi-faceted one which requires different approaches for different people based on the nature of your particular form of this phobia.

If you are worried about your fear of change showing in public, dialectical behavioral therapy can help conceal that. Strategies here focus on measures like half-smiles and other means of better disguising your anxieties in public so you don’t suffer social anxiety as well, while simultaneously tackling those same change-related fears with therapists.

Yoga, meditation, and mindfulness techniques are three other potential methods of overcoming the fear of change.

Anti-anxiety medication is also a possibility, although this tends to be reserved for cases of general anxiety which are more concrete.

In the end, your best bet is to talk with a licensed therapist. He or she will be able to diagnose and give shape to your phobia, which in turn can make it easier to treat.

Change may be constant, but fearing change doesn’t have to be. Following these steps can help you conquer your fears about change, thus helping you change for the better and take the first steps toward embracing a brave new you.

The Fear of Change