Do you check and recheck under the toilet seat and in the bowl before on the toilet?

Do you have a deep fear something may bite your derriere while sitting on the household throne?

Have you also watched those YouTube videos where people pull out a snake from inside of the commode and can’t stop thinking about it when you enter the toilet?

Or the video of a huge spider In the toilet bowl?

Don’t feel embarrassed; you are not alone. A recent study found that five percent of Americans have a strong, inhibiting fear of spiders and snakes.

If you have a phobia of snakes or spiders in toilets, you can overcome it by focusing on the underlying issue. Find out when and why you developed the fear, and try self-help methods like meditation and relaxation. You can also seek professional help if your phobia is intense and you are unable to deal with it yourself. 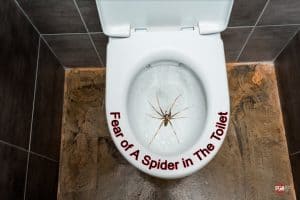 What Exactly Is The Fear Of Spiders And Snakes

We all have heard stories about snakes slithering through bathroom plumbing and just chilling inside the toilet. Snakes and spiders evoke both disgust and fear in many people.

Even a person who hasn’t encountered a snake or spider in their whole life can have this phobia. There is no specific term for snake and spider fear combined. However, the fear of spiders is called Arachnophobia, whereas snake fear is known as Ophidiophobia.

There has been a debate about whether snake and spider phobia is innate or learned. Max Planck Institute in Germany conducted a study on infants to answer this specific question. The researchers showed forty-eight six-month-old infants in this study two pictures. One had snakes and spiders in it and the other had flowers and fish.

The results were surprising. When the infants saw pictures of snakes and spiders, they reacted with larger pupils. This suggested that the fear could be innate and not learned.

While many people have this fear, some have a specific fear of encountering these creepy crawlers and itsy bitsy spiders in their toilets. There are not many poisonous snakes and spiders in the US, but those who have this fear will shiver just at the thought of a spider crawling up their arm, no matter how harmless it may be. They may even avoid going to the toilet for fear they may see a spider or snake inside.

Fear Of Spiders And Snakes In The Toilet Causes

For millions of years, humans have encountered different poisonous as well as nonpoisonous snakes and spiders. Our ancestors might have been incapacitated or even killed due to bites from these creatures lurking deep within the grass or on trees.

While fewer than 11 people die from spider bites every year, what makes spiders scary is their appearance. The uncertainty that the spider can land on your head or body at any given moment makes it even more frightening.

Snakebites kill approximately 81,000 to 138,000 people every year compared to spider bites. So it is understandable how these two creatures can cause some people to fear them enough to hamper their everyday routine.
Everything You Need To Know About The Fear Of Spiders And Snakes In The Toilet
Many scientists have concluded that the fear of snakes and spiders has an evolutionary origin. Like primates, we can identify these creepy creatures faster and react even faster because of the reaction mechanism in our brain.

As a result of this apparently inherited stress reaction, we learn to fear or dislike these animals. The combination of this fear with other factors can turn it into a phobia.

Parents’ fear of these creatures or a genetic predisposition for an overactive amygdala, which is essential to estimate danger, can cause children to be anxious about them.

When you have this fear, it can be challenging to live a normal life. To determine how serious your phobia is, you need to monitor your symptoms. A person can have this fear but not react as anxiously as someone with a severe phobia would.

There is nothing unusual about spider and snake fear, but if you get more anxious than others and experience panic attacks, then you most likely have developed a phobia. You might experience some or almost all of the symptoms above depending on the severity of your phobia.

Fear Of Spiders And Snakes In The Toilet Potential Treatment

If you feel like you are having difficulty coping with this fear and finding it hard to lead a normal life, you may want to consider some treatment for this anxiety. While there is no specific treatment for this phobia or any other phobia, you can explore one of many treatment options.

Try to first attempt to get your situation under control on your own. Start by convincing yourself that the fear is irrational and not something that will harm you. Reassuring yourself in this way can help you get comfortable with thinking or talking about your fear.

If possible, try to share what you feel with others like your family members or your close friends so they can help handle your anxiety. Try to be optimistic and start replacing negative thoughts with positive ones.

Try the art of calming yourself in difficult situations. Try calming yourself down while having anxiety attacks through meditation and breathing techniques. Meditation can help you better understand your fear and perhaps even give you control over your feelings. This may allow to you to get rid of that fear.

As the name suggests, in this type of therapy, the therpaist will expose you to the object of your fears gradually in a controlled environment. This will help you get used to them and help you eventually overcome them.

Cognitive therapy can help change the way you perceive a situation. This can help you deal with your phobia. By doing this, you’ll also gain control of your emotions and learn how to make sense of what’s real and what’s not.

None of the techniques mentioned above can promise to make your anxiety or phobia will completely go away. But these techniques will surely help you to take control of your feelings and better deal with this phobia.

There may be times when you feel that your feelings are being undermined, but seeking some help from friends, family members, or professionals may be able to help you through this.

You just need to close your eyes the next time you are going to the bathroom and take a deep breath. Tell yourself you can deal with this, so you can have the peace you always wanted in the toilet.