A Look at Hemophobia, Or the Fear of Blood

It is hard to imagine something more immediate to our life and livelihood than blood. For all the things we say we “cannot do without,” blood is definitely at the top of the list. There is a reason that we call companies charging us too much “bleeding us dry” or care deeply about our family as our “flesh and blood.”

How to Pronounce Hemophobia

But what if you’re afraid of blood? What if the sight of blood doesn’t merely make you squeamish or “chill your blood” but is instead a full-blown phobia?

Let’s take a closer look at hemophobia, the fear of blood.

Have you ever wondered, What is the fear of blood called? There are at least two answers, hemophobia and hematophobia. If you want to be technical about it, there are actually four answers, because the British spelling has them as haemophobia and haematophobia.

Whether you call it hemophobia or hematophobia, however, in the American or British spelling, the fact remains that compared to other phobias, having a basic fear of blood is relatively common.

On the one hand, it isn’t hard to imagine why that might be. After all, blood is so elemental to our lives that the sight of it can trigger a sense of anxiety about your well-being. You don’t need medical treatment to know that bleeding is a de facto bad thing for your health in most cases.

While in most cases bleeding isn’t life-threatening from a psychological standpoint, the sight of blood or someone bleeding can make you feel uneasy, giving you a general sense of something being wrong. All it takes is a little catastrophizing to turn that unease about the “wrongness” of bleeding into a full-blown phobia.

Hemophobia, the Arts, and Triggers 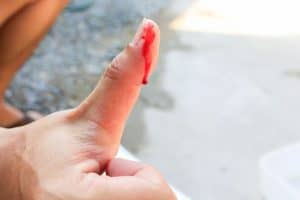 Authors and filmmakers are of little help, either, tapping into these instinctive fears and tendencies towards catastrophizing by associating blood with murder, violence, and death. In Edgar Allan Poe’s Masque of the Red Death the terror and death wrought by the Red Death is connected with “the madness and the horror of blood.” Shakespeare’s likewise links fear of blood and madness, most famously with Lady Macbeth’s famous cry “out, out damn’d spot,” triggered in part by terror at “the smell of the blood” while trying to wash away the literal and psychological stains of her bloody crimes.

Countless films have linked blood with murder and death, such as the iconic cut from dead eyes to blood swirling down the drain in the famous shower scene from Hitchcock’s Psycho.

What do all these images of blood have in common? They are all violent and, as such, present blood as the result of something contrary to peaceful, normal human life. Indeed, Lady Macbeth’s own doctor declares that “unnatural deeds do breed unnatural troubles.” Likewise, many of the triggers of hemophobia center around that perceived unnaturalness and horror.

This points to another triggering cause of hemophobia—fear of a loss of control. Body horror hinges in part on the idea that you are not in control of something so intrinsically linked with your livelihood and sense of self. Poe’s story ends by declaring the Red Death’s “illimitable dominion over all,” emphasizing the lack of control they have over their bodies and lives in the face of this pestilence and its disfiguring, deadly nature.

Then there is the possibility of personal trauma. This is a contributing trigger in many phobias, and hemophobia is no exception. If you suffered a traumatic injury at a young age which included severe bleeding, you may be more susceptible to hemophobia.

There are many symptoms, not the least of which are as follows:

In addition to these normal symptoms, children may experience hemophobia in different ways, such as the following:

Complications of the Condition

While it may be tempting to see hemophobia as a bit sensationalist, given its literary and artistic associations, the fact is it can cause very real issues for those who suffer from it.

For example, if you are a parent who suffers from hemophobia, it can leave you in a terrible bind if your child ever begins bleeding. Your parental instincts would have you assist them as you should, but your hemophobia may prevent you from doing so. For that matter, what are you supposed to do if you cut yourself?

Asking someone else to bandage you can be embarrassing, to say nothing of their potential reluctance given concerns of blood transmission and infection. What’s more, severe hemophobia can cause fainting, which can be both humiliating and potentially dangerous if you hit your head or otherwise injure yourself in the process.

In addition, hemophobia can trigger a wide range of other conditions. For example, if you associate blood with violence, you may be more reluctant to go outside. For someone who already has severe anxiety about going outside, this can contribute towards agoraphobia.

It can also leave you unable to join in sports. After all, these risk physical contact or injury, which can produce blood.

Then there is the matter of medical visits. Drawing blood is a typical part of most physicals. Blood tests are one of the most common and effective means of testing for a slew of medical conditions. If you have a fear of blood draw, however, this simple procedure can become a nightmare.

If you are diagnosed with a case of hemophobia, what are you supposed to do about it?

Treating hemophobia can be particularly difficult because it can be triggered by so many things. With that said, while the causes can be quite varied, medicines for hemophobia are limited.

Instead, you may be asked to focus more on Cognitive Behavior Therapy. CBT is one of the most common coping strategies for people who suffer from various phobias, and it is especially effective here. Much of hemophobia centers on the psychological associations you draw between blood and the scenes and ideas of horror as mentioned above. With CBT, you are encouraged to dissociate blood from these connections and, if possible, form positive mental associations instead.

How to overcome a fear of blood centers a great deal on putting your mind at ease. In addition to CBT, relaxation techniques such as meditation, mindfulness, and yoga can help put you at ease and mitigate the panic attacks which can result from a fear of blood. Exposure therapy can be helpful when it comes to helping those with hemophobia conquer their fear. It may be difficult at first, but with carefully controlled settings and strong support, it can be done.

For as difficult a struggle as a fear of blood may be, it does not have to be a hopeless one. With the benefit of context and CBT, you can look past the fearful associations commonly drawn with blood to conquer your fear of blood phobia one drop of understanding at a time.