Do you dread watching shark films? Does a documentary about sharks send a cold shiver down your spine?

Are you afraid of swimming in the open water? Are you constantly bothered by thoughts of an ominous fin coming your way?

If the mere mention of this predator sends you into a panic mode, you may have a phobia of sharks. This goes beyond the mild worry that almost everybody else has about these marine predators. Your fear of sharks and deep water may have some basis in fact, but it can also seem quite irrational.

Good thing that it’s possible to overcome this illogical fear. 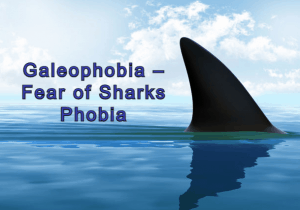 Galeophobia or Selachophobia is the name given to the fear of sharks. Galeophobia is derived from two Greek words: “galeos” meaning shark, and “phobos” meaning fear.
Most of us would not want to encounter a great white shark while enjoying time on the beach. This apprehension is perfectly normal. What distinguishes a healthy fear from a phobia is when it keeps you from doing daily tasks.
Phobia sufferers are extremely afraid of oceans and water bodies. They can’t even go to aquariums even when they know that the animals are safely behind glass windows.

Why Are Sharks so Fearsome?

Known for their curious nature, sharks usually bite humans because of mistaken identity. Sharks are out there preying on fish, not humans. Instead, seals and other marine life are their usual food. You are not at risk of becoming the next meal for sharks.

On the contrary, humans pose a greater threat to sharks. About 20 to 100 million sharks die each year due to illegal fishing. This has greatly affected the shark population.
According to National Geographic, there are over 375 species of sharks. Only about 12 species are considered dangerous.

Unfortunately, the fear of sharks is primarily perpetrated and kindled by the media. A common culprit is the film “Jaws,” which was inspired by a great white shark.

Why Do I Have a Phobia of Sharks?

Do you ask yourself, “Why am I afraid of sharks?” To establish how to go about getting rid of Galeophobia, you need to know what triggered it in the first place.
Your shark phobia does not come from what you know but from what you have heard. It can be terrifying to think that a deadly long creature with dagger-like teeth can bite you in half. However, the odds of a shark attacking you are slim to none.

The media has played a tremendous role in your shark anxiety. There are so many negative media reports on sharks killing swimmers and sufferers. Sharks are clickbait, so they are often portrayed as enormous, scary, and out to kill.

For a few Galeophobic people, the fear of sharks can come from a negative experience with a shark. This traumatic experience could be direct or indirect. Maybe you watched a person get attacked by a shark or heard of such an incident from a friend or relative.

The symptoms can either be physical or psychological. Physical signs tend to be more obvious while psychological signs are related to the mind and emotions. As part of a fear of sharks test, a therapist will check if you have any of these signs.

Psychological Symptoms
● Uncontrolled anxiety when you think about sharks
● Avoiding going to beaches and places where sharks can be found
● Panic attacks when exposed to shark scenes on the TV
● Persistent anxiety lasting more than six months
Now that you have established why you’re so scared of sharks, the next step is to explore treatment options for your anxiety. With the proper treatment, this fear can come crumbling down.

Self-Help Techniques to Cope With the Fear of Sharks

Shark phobia is treatable. It starts with accepting that you dread sharks and the fear is irrational. First, establish the depth of your anxiety through a galeophobia test and explore the right kind of treatment.
Do you ever wonder, “How do I stop being scared of sharks?” There are several options you can explore by yourself. Try them before reaching out to a professional.
Learn About Sharks
Conduct research and gather factual information about sharks. If you must eliminate the myths surrounding sharks, you must unlearn the negative knowledge you have acquired over time. Get authentic facts on shark species, diet, and habits.
Visit Sharks
To begin with, watch a documentary about sharks that portrays them in a good way. Visit a local shark aquarium and study the sharks’ movements. If this is too much for you, try getting close to sharks through pictures first.
After you get accustomed to sharks behind glass windows, try swimming with them. Swimming with sharks is done in most aquariums in a safe environment through programs. At this point, you are going to realize that sharks are not interested in feasting on you.
Resist the Shark-Attack Propaganda
Whenever an encounter of a shark and a human ensues, the media jumps on the opportunity. The media loves to call these encounters “shark attacks.” No wonder, as this headline is guaranteed to garner clicks and shares online.
You have to realize that this portrayal of sharks is not accurate. Sharks are not bloodthirsty animals out to wreak havoc on the human population. 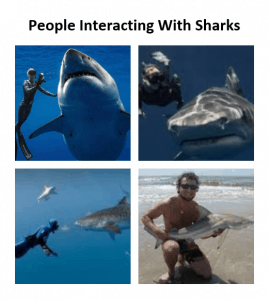 Talk to a Shark Expert
Try talking to a shark expert. They are in an excellent position to give you information that no one else can. A shark expert will present you with the facts. If they have studied sharks, they have interacted closely with them. Let them narrate to you their personal experiences.

Seek Therapy
You can opt for therapies like Cognitive Behavioral Therapy or simply CBT. This type of therapy involves identifying why the sharks cause such great fear in your mind. Your therapist will understand your phobia of sharks and deep water. They will suggest ways for you to cope effectively with phobia symptoms.
Only take medication as a last resort. Experts are still divided on whether pharmaceuticals work for phobia sufferers. Plus, they usually have side effects that may be worse than your phobia.

How to Cope With Galeophobia

Sharks are enormous, but that does not make them killers. It is high time you start seeing them in a new light. You don’t have to let this fear interfere with your life. Confronting your fear is the sure way to start the recovery process.
Does your job require contact with sharks or spending time in the water? With the proper precautions, people can swim and work in shark-populated areas. Such precautions include wearing the right swimwear so that sharks don’t confuse you for a fish.
You are more likely to die of a dog bite than from a shark attack. But knowing this fact is still a long way from eliminating this phobia. Gather all information you can about sharks and allow yourself to unlearn the myths.

Keep in mind that any attempt to treat a phobia requires time and patience. Take heart. Pretty soon, you can enjoy watching the latest shark movie with your friends.