The Fear of Zombies is real and for some much more!

What do “Zombieland,” “Zomblogalypse,” “The Dead Don’t Die,” and “Patient Zero” have in common? Aside from their absurdity? Yes, they’re all zombie flicks.

And where are you when your friends and family member watch and laugh as blood, gore, stained bandages splash the screen and heads roll?

Hiding? Reading a book? Outside playing a game? Just the thought gives you shudders, doesn’t it? Or is it worse? Do you experience a full-blown panic attack at the mere mention of zombies? Do you sweat, feel nauseous with a heart rate that would put Usain Bolt to shame?

If yes, then you, my friend, you may have Kinemortophobia, aka zombie phobia.

Living with Kinemortophobia is hard. Imagining that your friends, neighbors, and significant other will one day turn into a flesh-eating, mindless corpse cannot be fun.  The nightmares, sweats, constant anxiety, and hyper-vigilance will turn any sane person certifiable. But it doesn’t have to be that way. 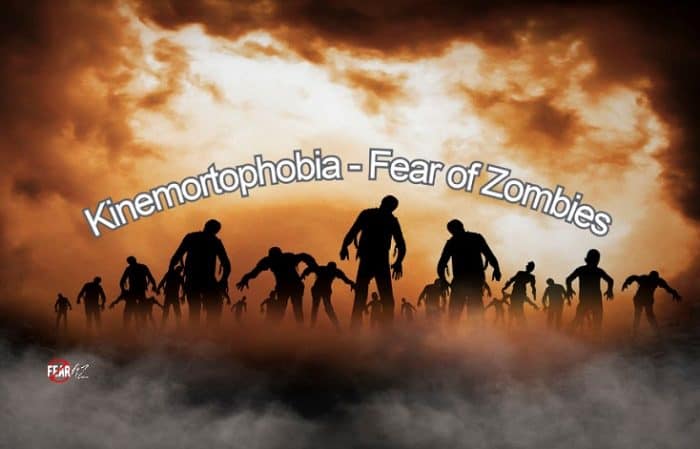 What is Kinemortophobia all about?

Kinetomorphobia is the fear of the living dead, or as most people like to call them, zombies.

Causes of Kinemortophobia? It can be caused by anything—from books with a zombie occurrence to movies that portray a zombie apocalypse.

Kinemortophobia is not a relatively new concept or phobia. However, it has become widespread because of the constant exposure to movies and books that focus on the end of the world through a zombie apocalypse.

While it’s relatively easier for people with other phobias to talk about their fear, it’s not as easy for people with Kinemortophobia. It is usually met with scorn and laughter. But for a phobic, Kinemortophobia is terrifying. The stress and anxiety it causes can restrict people from living life to its fullest.

Fear A-Z Quick Fact: Zombies most likely originated in the early 19th century when West African slaves were brought to the Eastern Islands of the Americas. Haiti to more specific but other Caribbean islands as well. It is suggested that the powerful neurotoxin called tetrodotoxin was the cause of the “zombie” like state, although this is disputed by some. There is also the use of the Voodoo religion. Throughout the years these stories have morphed into the multitude of Zombie story-lines including movies, books and songs.

Not everybody has the stomach for gore. Feeling a sense of unease by the blood, violence, and carnage that comes with any movie featuring zombies is, in fact, quite normal.

You look at the symptoms. Kinemortophobia symptoms are usually divided into two categories. Let’s have a look.
Psychological Symptoms
Kinetomorphobia is evident through the display or occurrence of these physiological symptoms:

Physical Symptoms
People with a fear of the living dead typically experience panic and anxiety attacks. These can be triggered by watching or reading something with zombie content. Many people with Kinetomorphobia have reported the onset of anxiety attacks in the middle of the day, with no prior warning, as well. There’s no telling.

However, you can watch out for tell-tale signals such as:

If you’re still unsure, you can take a Kinemortophobia Test online to determine whether or not you have a fear of the living dead.

In some cases, Kinemortophobia can be intense enough to impact the everyday life of those affected by a long shot, stunting their growth in multiple facets of their life.

In the worst cases, this could also lead to depression as individuals find it difficult to communicate with people, especially if previous attempts have only earned them insensitivity, disbelief, and mockery.

What Can You Do To Help Yourself?

Don’t be ashamed of how you feel. It doesn’t help to put up a brave front and deny having felt some or all of the above-discussed symptoms. Be honest with yourself. If you intend on taking the self-help route, begin with acceptance.

Kinemortophobia is a condition, a phobia, that affects thousands of people worldwide irrespective of age or gender. It is as real as it gets. So what can you do to help yourself?

Your most crucial defense will come from being able to end the anxiety attacks before they get severe.

Are you now wondering, ‘how to overcome Kinemortophobia?’

Here’s what can help.
Ask Yourself: Why Is This Happening To Me?
The first step to self-help involves knowing the “why.” For this, you will have to dig a little deeper. Ask yourself, ‘Why am I so afraid of zombies?’ What triggers your fear of zombies? Is it the books, the images, the blood, gore, or the idea that they exist in real life and are not just fictional characters?

Once you figure that out, take the next step.
Stand Firm Against Your Fear
For some people, avoiding everything zombie-related works. For others, doing the opposite helps. Instead of steering clear of all things zombies, you can increase the frequency of your exposure to zombies in books and movies. Here’s a pro tip, though. Don’t do this at night, where you’re more likely to exhibit traces of fear and prolonged effects. Do it during the day. With people around.

With constant exposure, the chances are that the effect zombies have on you will lessen with time. If your efforts are consistent, the odds are that you might overcome your phobia once and for all!
Experiment With Relaxation Techniques
Try breathing exercises as often as you can. For example, when you experience the beginning of a panic or anxiety attack, calm yourself by taking deep breaths and practicing meditation.

Experiment with alternatives like calming tea and exercises that would help you sleep better at night and reduce the chances of reliving nightmares that put you on edge. Being prepared will allow you to tackle your fears head-on.
Talk About It
The fear of zombies is mostly met with laughter. People find it hard to understand how someone can be afraid of a fictional character. This is why you need to initiate conversations to normalize it because, let’s face it, Kinemortophobia is 100% real.

This works both ways. It will allow you to present your fears and be accepted for it and educate others about the reality behind the phobia.

When To Seek Professional Help?

Controlling your fear is not always easy. Sometimes you may require professional help. A well-trained psychotherapist will help you get to the root of your fear and triggers. They will work alongside you and find strategies and techniques to help you deal with your phobia.

A psychotherapist can also help reprogram your mind and desensitize you to zombies.

Kinemortophobia treatment also includes a type of psychotherapy called ‘exposure therapy. By exposing you to the source of your fear, medical professionals will try to debase your fear, one step at a time.

Simple Tips To Avoid The Effects Of Kinemortophobia

How to cure Kinemortophobia:101
Embrace the fear
We usually shy away from initiating talks about the things we fear because we think it makes us look weak. Don’t do that. Don’t try to conceal the fact that you’re afraid of zombies.
Zombies Are Fictional Characters-Treat Them Like That
Zombies are an invention. They’re imaginary. Have you ever seen dead people walk and engage in fights? No.

Rationalize it. If they were real, they would have walked the earth and not just be a permanent resident in your dreamland. They do not exist. So the next time you experience the onset of fear, remind yourself – they’re not real. With time, your brain will come to accept the fact.
Avoid Everything Zombie
Fear of zombies can be stressful. Start by avoiding everything zombie. There’s a new zombie apocalypse movie? A zombie-centered fictional book your friend seems to rave about? Sit them out.
Stop Associating With People Who Downplay Or Laugh About Your Fear
The company you keep can impact your lifestyle. It could either be fostering or stunting. If you find yourself in the company of people who constantly mock your fear or embarrass you for it, respectfully bow out. You shouldn’t be held accountable for something you have no control over. It’s as simple as that.

The Takeaway
The fear of the walking dead is more common than you would think. Talking about it can act as a stepping stone to awareness and acceptance. It’s easy to feel cornered and guilty when the people around you speak lightly about something that has a grave impact on your life.

You have to be your champion. You are the number 1 supporter in your fight against fear. The fear of zombies can be overcome. It’s going to take time, but believe that it will happen eventually.