A “Flash Course” in Astraphobia, or the Fear of Thunderstorms and Lightning

Do you tremble with fear when a storm rolls in?

Does the house shaking from thunder force you to take shelter under the covers?

Do you watch the weather reports for news of thunderstorm warnings then start to sweat?

The first move in tackling your fear of thunderstorms is to understand the process. That is what we will try to do here. Read on. . .

From Zeus in Greek mythology to Thor in the Norse pantheon to Indra in Vedic literature, thunder gods echo across the ages and pages of some of our oldest stories. Thunder has always existed, but our understanding of how weather works is comparatively recent. As such, our ancestors knew what thunder was, but didn’t know what caused it, which naturally made it all the more mysterious and terrifying to them.

Today, we can pinpoint the exact cause of thunder, but that doesn’t mean that people haven’t stopped finding it “awesome” in the purest sense of the word. On the contrary, we may no longer believe in Zeus and Thor, but people still suffer from a fear of thunderstorms. Not only that, but now that the skies aren’t the domain of pantheons but airplanes, some people suffer from a fear of flying during thunderstorms.

With that in mind, let’s separate the myth from reality and get to the truth underpinning this fear of thunderstorms phobia. 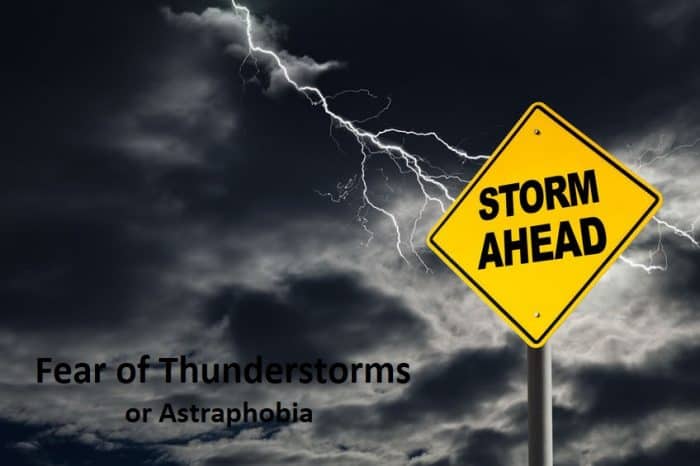 If you have ever wondered to yourself, in between trembling at the roll of thunder, “What is the fear of thunderstorms called?” the answer is astraphobia. It being a phobia, it is not rational, but rather an extreme reaction to both thunder and lightning. As such, while simply explaining the causes of the condition is not necessarily enough to cure oneself of it. A fear of thunder and lightning is still most common when one is uninformed about what causes those things and only sees and feels the raw power.

It should come as no surprise, therefore, that astraphobia is more common among children than adults. Some children outgrow the fear, while others live with it throughout their lives. Anyone who has ever seen a cat or dog start howling or hiding during a thunderstorm (or fireworks show) knows how those loud noises affect them, too, and sure enough, they can likewise suffer from astraphobia.

As it turns out, that compulsion to hide is one of the most characteristic symptoms of the condition. After all, whether you’re a pet today or a human worshipping Zeus more than 2,000 years ago, you know that the raw force unleashed by a thunderbolt is incredible—and there’s nothing you can do to stop it. The natural instinct when faced with such an immense and seemingly impossible-to-stop threat is to hide.

Of course, for most of us, thunder and lightning isn’t a real threat. According to National Geographic, your odds of being struck by lightning are only 1 in 700,00 per year, while your odds of beings struck at any point of your life is 1 in 3,000. That’s tiny, but even tinier is the amount of people who actually die from being struck.

Just 10 percent of people who are struck by lightning die, according to the National Weather Service. From 2009 to 2018, the US averaged around twenty-seven deaths from lightning.

The impulse to hide is certainly one of the most recognizable symptoms of this condition, but it is far from the only one. As a condition that inspires a lot of anxiety among those suffering from it, astraphobia can cause people to suffer from some of the most common conditions associated with that. Even so, the causes of this condition—the loud noises and flashes associated with thunderstorms as well as the general aura of mysteriousness which can pervade the phenomena in the absence of scientific understanding—is pretty clear.

As a result, a general sense of fear and dread as well as shaking and trembling are common symptoms of this condition. 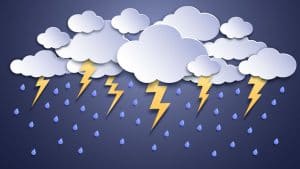 Symptoms for this condition include:

In the realm of astraphobia-specific conditions, you may find yourself obsessively checking every development with a storm until it passes. You may feel as though this gives you a greater sense of control by giving yourself the sense that you are at least “doing something” about the storm, but of course weather is natural phenomena over which you have no control.

On the other hand, if you fall somewhere on the autism spectrum, storms, thunder, and rain in particular can be especially disconcerting. While many find the sound of rain soothing and even make autonomous sensory meridian response (ASMR) tracks with it, for those with autistic conditions, it can sometimes feel violent, like “bullets.”

Those with a family history of anxiety may be at a greater risk of suffering from astraphobia.

In addition, if you have suffered a traumatic incident during a storm, it may translate into an acquired phobia of thunderstorms in all shapes and forms. What’s more, if you fly, and especially if you already have a fear of inflight turbulence, a fear of flying during thunderstorms can be a natural result. When considering a fear of thunderstorms in adults, this can be a common reason why the phobia exists and persists past childhood.

First, there is the possibility of controlled exposure therapy. This is just what it sounds like, carefully exposing someone to a thunderstorm in as calm and controlled a fashion as possible to help them conquer their fear. This naturally requires a fair amount of trust and time.

In addition, there is dialectical behavioral therapy, which couples exposure therapy with dialectics and other stress-relieving approaches.

Mindfulness, meditation, and deep breathing exercises are all common tools to combat general anxiety, and can be helpful here.

Others may propose a homeopathic remedy for fear of thunderstorms, though this is more in the realm of placebo-esque personal soothing and relaxation measures than hard science.

Finally, visualization techniques can help you picture brighter, less chaotic weather conditions and soothe yourself in the process.

If those don’t help and you are still wondering how to get over a fear of thunderstorms, you may wish to consider turning to professional experts.

Sitting down with a therapist and talking through your fear of thunderstorms and why you have them can help you get to the root of the problem. This, in turn, can make it easier to find a solution that works best for you. As with all forms of therapy, you should not expect results overnight, but with persistence and patience progress is possible.

While there is no “flash” treatment for getting over a fear of thunderstorms and lightning, neither the psychological condition nor the weather behind it is a mythologized mystery. In fact, in a Big Think interview, Stephen Fry compares coping with mental health issues to weather—such struggles are real, valid, and should not be denied while they are occurring. That said, the weather does change, the sun will come out, and so recovery remains a possibility for you.