Conquering the Fear of Cancer

Do you worry consistently about getting cancer? To the point where it changes your daily life?

Now, we don’t mean eating better and exercising—these are healthy living habits. We mean you will not go out in the sun, wear headphones, use a cell phone, or even be in the same zip code with someone who is smoking.

If you take your fear this far, you may suffer from carcinophobia or the deep fear of cancer.

The first step in conquering your fear is to understand why the fear exists. Once that is achieved, work backwards to remedy the fear. We all have fears, but managing the fear is necessary in order to live a normal life. Read on and learn more.

In its own perverse way, there are few things with a greater potential to unify us in our common humanity than cancer. No matter our myriad of differences, cancer is, like the Grim Reaper, a Great Equalizer before whom we are all equally vulnerable.

There is nothing wrong or irrational about fearing something that can affect any one of us. After all, it’s one of the leading causes of death in the world. What’s more, there is nothing wrong with calling attention to particular conditions, such as prostate or breast cancer. Doing so can naturally evoke a general fear of cancer anxiety or particularized fear of either forms of cancer. 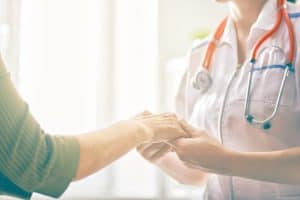 However, you should not allow this fear of death to keep you from living your life. Having an overriding fear of cancer can cause you to become closed off, a condition which can lead to terrible consequences.

So, how can you manage your unrealistic fear of getting cancer with, say, a legitimate fear of cancer, and how can you even know the difference between the two?

Exploring and Explaining Your Fear

First, it’s important to distinguish between this and a general fear of illness, which would be classified as hypochondriasis. If you sit around all day paralyzed with a first-person-fixated “fear of cancer taking my life,” it may not just be cancer that is the problem but a greater clash between your sense of ego and mortality. By contrast, the fear of cancer on its own is known as carcinophobia.

One of the biggest problems with diagnosing this condition, however, is the fact that it is a fear which, as stated above, can take several forms. Take a moment to ask yourself: Where does your fear of having cancer come from?

If the answer is a family history with a specific condition (especially one like breast cancer), your fear may be very well-founded. That isn’t meant to alarm you, but simply to be honest, because the best way to fight phobias is with facts. While breast cancer is possible for those under 40, it is far more common for women above that age range.

From the age of 40, women should start to consider mammograms, though whether and to what extent this is necessary is a question you should ask your doctor. That said, early detection is critical, and Cancer.org recommends women 45 to 54 receive mammograms every year, while women 55 and older get them either every two years or maintain their yearly regimen.

In the United States, women have a roughly 1 in 8 chance of contracting some form of breast cancer during their lives, but the mortality rate has dropped dramatically in recent years to 1 in 38, decreasing by 1.3 percent each year between 2013 and 2017 alone.

While a 1 in 8 chance may sound scary—and you should definitely get yourself checked at the appropriate ages or if you experience any warning signs—as Cancer.org points out, this also means there is a 7 in 8 chance you won’t get breast cancer.

As such, perspective and how we frame the condition matters greatly in conquering a fear of cancer. This is true not just for a fear of breast cancer but a fear of any cancer.

The cause here would seem pretty self-explanatory: Cancer is a naturally scary condition, one to which we are all vulnerable, and so fear is a natural response. However, this can be exacerbated by obsessively researching or fixating on any negative news story regarding the condition. While we may have a strong propensity to identify with a worst-case scenario, as noted by Cancer.org in their 1 in 8 chance versus 7 in 8 chance example, perspective can be a huge causal factor here.

Cancer is already a potential problem. You don’t want the added burden of a crippling phobia.

Potential symptoms of this condition typically fall within the range listed above, namely general anxiety and a fixation on negative facts about the condition. 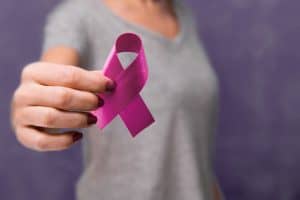 As per the Center for Treatment of Anxiety and Mood Disorders, additional causes of anxiety regarding cancer can include:

The extent of your phobia will determine whether you can solve it on your own, or need additional assistance. In the former case, the phobia is best treated as a general anxiety. Combatting it with mindfulness, meditation, deep breathing, and other exercises used to fight anxiety can be helpful.

You may also find it therapeutic to consider writing a journal or otherwise giving yourself a creative outlet. Fixation on the negative can be exacerbated when you have nothing else to do. Busying your mind and giving it something positive to work on can help you limit negative thoughts about cancer.

In addition, keeping a journal or otherwise writing about your feelings about cancer can make it easier to articulate them to others, including mental health professionals who specialize in dealing with the fear of cancer.

Finally, there are countless cancer support groups. These can help you tackle both the fear of cancer as well as the struggle through the illness if you do indeed have it, and recovery from it. One of the worst ways to exacerbate any condition is to feel as though you are alone. Support groups are one of the best resources in crushing that misconception and empowering you to face your fear head on.

The Center for Treatment of Anxiety and Mood Disorders specializes in combating the fear of cancer, and can be reached via their website or hotline at (561) 496-1094.

Cognitive behavioral therapy (CBT) is a common form of treatment used for anxiety-related disorders and phobias. It involves rewiring the way your brain thinks about certain concepts by training you to think about them differently. For example, a CBT therapist can help you stop associating cancer with the worst possible scenario and instead contextualize the risk factor as in the Cancer.org example.

Some professional therapists have also taken to using virtual reality, which can help enhance visualization techniques.

According to the Memorial Sloan Kettering Cancer Center, some of the most effective professional and personal means of battling the fear of cancer include:

Cancer may be a great equalizer for humankind, but it also underlines our shared humanity. Together we can Stand Up to Cancer, and with the help of support groups or mental health and cancer treatment professionals, you can stand up to your fear of the condition and conquer it.

link to Fear of Outhouses-Paruresis-Portaphobia

Continue Reading
link to Gymnophobia - The Fear Of Nudity

Understanding Gymnophobia and The Fear of Nudity Wondering why you can so deeply relate to Tobias Funke from Arrested Development and his crippling fear of nudity? Chances are, you’ve got...