Aquaphobia an Excessive Fear of Drowning

Do you make excuses to avoid going for even the shortest dip in the shallow end of a pool for fear you won’t come up again?

Do you find Sebastian’s suggestion in The Little Mermaid that “It’s hotter under the water” absurd, and were you intensely relieved when Ariel grew legs and walked on land?

Is the whole idea of that much water enough to make you dizzy, nauseated, and never wanting to see lakes, rivers, oceans, or swimming pools ever again?

If so, you may have a fear of drowning. Water covers 71 percent of the Earth’s surface, and if that factoid alone is enough to make fear wash over you, chances are you have some form of aquaphobia or fear of water.

The first step towards conquering any fear is understanding it, so let’s take a closer look at the fear of drowning versus the broader fear of water. We’ll look at symptoms and causes, and provide some suggestions on how you might overcome either phobia.

“Aqua” means “water” and “phobia” means “fear,” so you don’t need a degree in psychology or Greek to decipher what this term means in its most basic form. 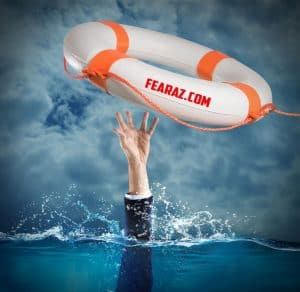 One of the most frustrating things about the fear of drowning (besides the fact that it isn’t recognized as an independent phobia but rather overlaps with two more established ones) is that it can come from any number of sources. That’s part of why it isn’t its own standalone phobia.

Maybe you had a near-drowning experience as a child or had a sibling or friend who did.

Maybe you knew someone who unfortunately did drown.

Maybe you’ve just heard and seen way too many movies and news stories about people drowning, and it’s kicked your anxiety into high gear.

Whatever the reason you have for being so afraid of drowning, it’s almost certainly caused by something in your own personal history. Everyone’s history is different, and so are the underlying causes of your phobia, thus its overall nature will be different from one person to the next.

Maybe you can watch The Little Mermaid just fine, but the passengers struggling to swim in the icy Atlantic in Titanic do you in. Maybe no films bother you but simply the presence of water itself.

Whatever the inciting incident for your phobia may be, it will almost certainly be localized in past traumas. Revisiting these with a trained psychological professional is an essential step towards overcoming the fear of deep water and drowning.

The symptoms of aquaphobia and thalassophobia are generally anxiety-based, which means that they have significant overlap with general anxiety disorders as defined by the DSM-5, the standard text for defining phobias.

For something to be considered a “psychological phobia,” it needs to be persistent and typically excessive and unreasonable.

For example, if you were actually on the Titanic after it hit the iceberg, nobody would claim you had an “irrational” fear that you were going to drown. Given the circumstances, your fear would have been (tragically) all too rational.

The same applies if you have ever been on a ship that capsized or if you cannot swim. You are or can imagine yourself being exposed to conditions in which drowning could be a very real, very dangerous possibility. There is nothing phobic or irrational about fearing that.

On the other hand, if Titanic doesn’t make you think “I’m the king of the world!” or “Draw me like one of your French girls!” or “Wow, this movie’s really long!” but rather “Oh my God, I’m going to drown someday, too!” your fear is irrational and excessive. If that irrational fear persists over time, it’s likely a phobia such as aquaphobia and thalassophobia.

That persistent, irrational, excessive fear is sometimes triggered by the merest exposure to water. If you’re sitting poolside at a party and someone accidentally splashes you a bit and you suddenly fear drowning, chances are you have some form of this condition. The same is true if you avoid the party in the first place for fear of drowning in the pool, even if you stay away from it the whole time. 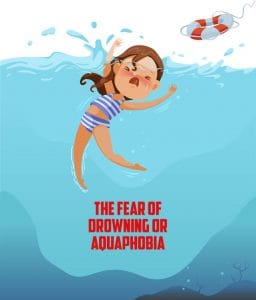 Avoiding any and all bodies of water, or flinching and trembling excessively at the sight or merest splash, are among the most common physical symptoms of this condition.

In extreme cases, that avoidance can become so extreme as to become ablutophobia, being so afraid of drowning that you even fear bathing or taking a shower. Unless you want to take sponge baths for the rest of your life, this can mean foregoing personal hygiene—which is a pretty big problem for your health and anyone within whiffing distance of your body odor.

Other common symptoms of aquaphobia include the following:

All of these symptoms are actually reasonably common when it comes to general anxiety-related conditions. This is yet another reason why a fear of drowning is not a distinct phobia in the DSM-5. Many of its physical as well as psychological symptoms are very similar to those of general anxiety disorders, just water- and drowning-based.

It’s one thing to not have a distinct phobia name for the fear of drowning, but a lack of treatment isn’t a prospect you want to consider.

When it comes to how to get over the fear of drowning, the most prominent answer is cognitive behavioral therapy. This type of therapy works to rewire the way your brain imagines and processes certain concepts (like water) ultimately helps you to think of them in a more positive manner.

If your mind immediately links “water” with “drowning,” cognitive behavioral therapy can be helpful for undoing this association, while getting at the root of why you have that association in the first place.

Therapy sessions for prior traumas leading to a fear of water and drowning can also be helpful, as can support groups with similarly minded people.

Exposure therapy can also help you get over your fear by literally exposing you to water and “showing you” that you won’t drown. Obviously, since this is directly triggering your fear, it can be highly stressful. However, exposure therapy is conducted in highly controlled settings with therapists and others there for emotional, physical, and psychological support, and can be quite effective.

In severe cases, medication may be prescribed, although this is very rare.

If you feel like you’re drowning in your fear of deep water, treatment techniques for aquaphobia and thalassophobia can help you rise above them once and for all.