Kicking Your Atychiphobia, or the Fear of Failure

Few cartoon characters experience failure as often or as acutely as Charlie Brown.

Every year around Thanksgiving, millions of Americans still watch him be so determined to kick that football, only for Lucy to pull it away and for Charlie Brown to fall flat on his back.

At Christmas, we once again watch Charlie Brown struggle with failure as he buys a weak and feeble Christmas tree for which the other children immediately mock him.

In one TV clip or comic strip after another, Charlie Brown is determined to pitch a baseball and strike batters out, only to fail once more.

If any character has a right to have a fear of failure, it’s Charlie Brown. We use fancy words like “sisyphean” or “quixotic” to describe characters defined by how they’re doomed to failure, and Linus describing Charlie Brown as “the Charlie Brown-iest” person he knows might just be added to that list someday.

But Charlie Brown (mostly) never lets his fear of failure stop him from trying.

And you shouldn’t either. 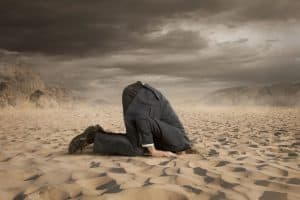 First and foremost, let’s define atychiphobia. Fear of failure statistics show it to be pretty common compared to other phobias. For example, a 2015 Los Angeles Times article noted it was statistically more common among respondents than a fear of spiders, being home alone, or the supernatural.

Unfortunately “fear of failure” is one of those pop psychology terms that gets appropriated by media outside the psychological community. While it’s understandable why (we all “fear” failing sometimes) cliché motivational cat posters aren’t really a proper approach to this very real phobia.

As such, for those wondering what the fear of failure is called, the proper clinical term for a psychologically defined fear of failure as atychiphobia. It is distinct from simply being “afraid” of failing at something by degree, namely, that it leaves you so terrified of failure that you feel paralyzed and unable to do the action in question, or perhaps do much at all.

Fearing failure is being nervous before applying for a university or going for a job interview.

Fear OF failure, a la atychiphobia, is being so paralyzed by fear of failing that you not only don’t apply or show up to the interview, but invent excuses, torment yourself with endlessly imagined worst possible scenarios, and hate yourself the whole time. 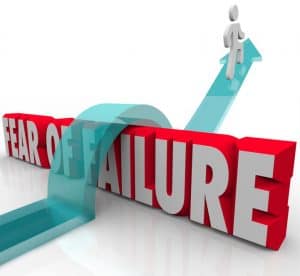 Causes and Symptoms of Atychiphobia or the Fear of Failure

One of the biggest causes of this phobia is a deeper underlying fear of shame or embarrassment. No one wants to experience that, but if you experience an anxiety-associated phobia, you may experience this fear even more acutely.

That said, everyone experiences shame and embarrassment differently, and indeed, different people consider different things shameful or embarrassing. There is no easy one-size-fits-all solution to what can trigger a bout of atychiphobia. At the same time, it’s safe to say that if you already experience general anxiety or other conditions connected with it, you are more susceptible to the darker sides of this fear than others.

Complicating matters even further is the fact that there are both physical as well as emotional symptoms of this fear, depending on your perspective. This is true of most conditions associated with anxiety. You don’t just feel a sense of anxiousness and the negative emotions that come with it, but may likewise feel physically ill as well.

Potential physical symptoms of anxiety-induced fear of failure include:

Potential emotional symptoms of atychiphobia include:

In addition to these basic outlines, a fear of failing can lead you:

This is hardly a catch-all, and each case of anxiety-induced fear of failure is different. Nevertheless, these lists demonstrate how broad and far-reaching the consequences of this phobia can be, and why it takes far more than a mere inspirational meme or mug to set things right.

Self-Treatment Options for Your Fear of Failure

While it can be hard to locate “positives” about this condition, one would be that it is more open to self-treatment than many other conditions. Since every instance of fear of failure is individually determined, so too is your path to overcoming this condition.

That said, the question of how to overcome the fear of failure thus has no singular answer, but instead many different treatment options depending on your symptoms and which are the most acute.

For example, if you really struggle with trembling, nausea, and an overwhelming sense of anxiety, meditation and mindfulness exercises can be useful ways of calming yourself. These are common techniques recommended for all manner of different anxiety-related conditions and can do wonders here. Establish a place in your home or office where you can practice deep breathing or calming meditation exercises. Refocus your mind and work to calm feelings of anxiety and failure.

If you are worried about losing friends or disappointing people, it’s worth remembering that true friends will not mind if you fail. On the contrary, they will support you all the more in your time of need. Opening up to friends can be scary and leave you feeling very vulnerable, but the support they give you can really help you overcome some of these obstacles.

If your phobia is rooted in previous failures, it’s worth remembering that ‘ past’ isn’t necessarily a ‘prologue.’ Just because you failed before doesn’t mean you’ll fail again. Failure can be a valuable, if brutal, learning experience, and a further step on the path to success, whatever that may look like for you.

Finally, if you are a perfectionist, it’s worth challenging that belief. No one is perfect, including yourself or those you idolize. Make peace with progress, and you may find it a lot more rewarding and your anxiety a lot more manageable.

If you still feel you need or can benefit from professional assistance, therapists can help you come to terms with some of the root causes of your phobias. They can also suggest mindfulness techniques, and in rare cases, prescribe beta blockers or sedatives to help calm your nerves. Therapists can also suggest support groups, which can be a great outlet for those needing the extra boost.

They may also employ cognitive behavioral therapy (CBT) to help rewire the way your brain considers certain concepts that trigger your bouts of failure-related anxiety.

It may be dark and difficult at times, but successfully overcoming a fear of failure does not have to be an impossible task.

You can and should imagine a happier, more successful future.