Gelotophobia – The Fear of Being Laughed At

Do you have trouble dealing with laughter unlike your friends and family members? Do the sounds of laughter make you uneasy and uncomfortable? Do you often feel that people laugh at you even though you have not spoken directly with them?

It must be a scary feeling to have all eyes on you. To think about how others laugh at your expense and take joy in your inadequacies. However, it doesn’t have to be that way. There are ways to change the way you feel about laughter.

If you are afraid of laughter, you probably have gelotophobia or a fear of being laughed at. You will be happy to know that gelotophobia is curable and not a mental illness you must fear. With the right information, you can find a suitable cure. 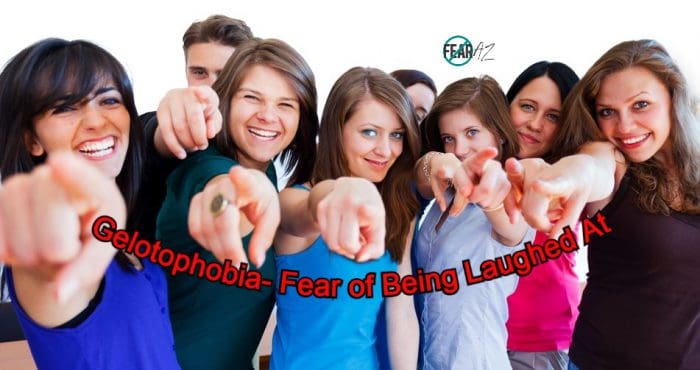 What is Gelotophobia All About?

There are various questions around this phobia. Let’s try and address a few:

What is The Fear of Being Laughed at?

Gelotophobia is a simple phobia, a kind of anxiety disorder, where the person feels any sound of laughter in their direct vicinity is directed at them. Although most people are unhappy about people laughing at them, gelotophobes are exceptionally afraid of experiencing it. It isn’t a simple reaction where the person gets displeased. They can have serious health issues due to this phobia.

In most cases, gelotophobia is the consequence of a very traumatic experience that loosens a person’s self-esteem and reduces their self-confidence. This results in a severe reaction every time they listen to someone laugh.

As they are incapable of differentiating between light teasing and mockery, they have very little sense of humor. The sounds of laughter create a negative impact on their overall disposition as they relate it with their traumatic instances and feel it could be directed at them.

The saddest thing is, even if they are aware of how unreasonable it is to link the sound of laughter to themselves, they are unable to stop feeling like they are getting mocked.

If you are wondering, what causes gelotophobia, these are some of the reasons:

Body-Image Issues
Many healthy children with weight issues often get mocked by other children during their childhood. Though most children who are overweight face similar issues and eventually grow out of them, some of them develop a severe phobia of feeling afraid of being laughed at.

Bullying
Bullying is a common problem both at schools and even in playgrounds. Here, weak kids and loner children who do not have many friends get targeted by bigger and spoiled kids. Though bullying can have many adverse effects on the development of children, fear of being mocked is one of them.

Having a Disability
As children and even adults, people who have cognitive disabilities such as listening and hearing, and speaking impairments often get mocked. No one likes to get mocked, very few develop gelotophobia.

Familial Issues
A toxic familial environment where close family members mock their children or compare them can also lead to gelotophobia. At first, it’s because children feel they aren’t taken seriously. However, they might grow up with these insecurities as parents or guardians play a major role in their life.

Low Self Esteem
Unlike most other phobias, this one is most likely not related to trauma. It could be low self-esteem or low confidence in one’s being that makes them feel like they are constantly being mocked. However, you mustn’t underestimate the effect of low esteem based on the issues it causes. Apart from many mental health issues such as depression and anxieties, it can also cause laughing phobias.

Similarity to Asperger’s Syndrome
Although the symptoms and causes of gelotophobia are similar to many personality disorders and Asperger’s syndrome, it is unlikely that you could develop this phobia at a later age.
These are some of the reasons why gelotophobia is caused. However, there have been studies into a phobia that have changed the way experts look at it over the years.

Studies on Gelotophobia
Based on the gelotophobia tests conducted by Willibald Ruch of the University of Zurich, people went to extreme lengths just to avoid getting mocked. One subject kept waiting for a bus with an empty last row because the fear of being mocked by people behind was too great.

According to a study conducted by Dr. Platt, 13% of the people in Britain have gelotophobia, whereas Denmark has the lowest number of gelotophobes. These extreme numbers denote the differences in the cultural environment of both nations. Considering the British sense of humor, laughing at others is common in English society. In Denmark, people do not laugh at others.
Based on a study conducted by Willibald Ruch on 23,000 people in 73 countries, he observes gelotophobia can affect 2-30% of the population. In Asia, the number of gelotophobes is higher due to shame culture.

This phobia manifests in many ways and affects the everyday life of the patients. Here are some of the common ones:

Psychological Symptoms
1. Avoid social events to avoid people
2. Get angry and react badly when people laugh
3. Cannot make jokes or laugh at them
4. Appear dry, cold, and shy to outsiders

As most people who have gelotophobia do not understand the meaning of laughter, they can often react unexpectedly to outsiders. Getting a mental breakdown or shouting in anger or having a major panic attack are symptoms to denote something isn’t right.
If you are thinking about how to overcome gelotophobia, there are many self-help and professional methods you can try.

How To Overcome the Fear of Being Laughed at?

If you feel you are showcasing gelotophobia tendencies and are worried because you are thinking about how do you cure gelotophobia, there are a couple of things you can try:
● Make a list of the things you love about yourself
● Maintain a journal regularly
● Meditate, exercise, or do yoga
● Talk about your insecurities with the people you trust
● Find ways to build your skillset and morale
● Make a habit of asking people of their opinion about you
● Compare it with how you view yourself
● Learn how to be more self-aware
● Try to weigh your pros and cons to reduce insecurities
● Combat negative thoughts with positive ones

If this doesn’t work, and you are still asking yourself “how do you cure gelotophobia?”, there are other ways. But these should help you take a step in becoming a better version of yourself.
Professional Help
Although looking for a gelotophobia cure isn’t tough, it’s advisable to see a doctor when you are facing a severe phobia, the kind of treatment you undergo is equally important.
Clinical Hypnotherapy
Clinical therapies include serious therapies like hypnotherapy. Though its extremely effective, hypnotherapy is used in severe cases where the patient is unable to lead a normal life due to the phobia that needs the most effective treatment.
CBT or Cognitive Behavioral Therapy
This is also called talking therapy where the therapist tries to change the way a person thinks by asking various questions that have to do with how the person feels about an event and how they view themselves.
BWRT or Brain Working Recursive Therapy
Another talking therapy where the therapist tries to rewire the functioning of the brain simply by talking. If there are negative ideas or things that are stuck in a person’s head due to various situations, the therapist tries to resolve them.

How to Avoid Gelotophobia Altogether?

The thing about phobias is, they never go away completely. However, you can reduce the effects with timely efforts, therapies, and many other ways. To avoid feeling like you are being mocked there a couple of tips that can help:
Simple Tips to Avoid Gelotophobia
1. Build your sense of humor
2. Watch stand-up comedies
3. Try laughing at yourself
4. Stop thinking about people
5. Observe how comedians make fun of themselves
If it’s scary to listen to their laughs, focus on ignoring them. If you can convince yourself that nobody is interested in laughing at you, you might be a step closer to overcoming your fears.

Although laughter is the best medicine for most of us, many people suffer due to it. However, it is curable and something we can fix. If you feel like you are showcasing these symptoms or know of somebody who is, try to be a bit understanding towards them.