Genophobia: What You Need to Know to Overcome the Fear of Sexual Intercourse or Intimacy

If you feel sudden and unexplained anxiety, panic, or discomfort whenever you’re about to be intimate with your partner, then you might be suffering from genophobia or the fear of sexual intercourse and intimacy.

Genophobia can be a frustrating health condition because it can affect you physically and mentally. In many cases, the mere thought of sexual intimacy triggers the phobia, thus affecting how you interact with others.

If you suffer from genophobia, you do not simply dislike sexual intimacy, but rather you often feel intense fear and panic. Fortunately, treatment is available for this phobia.

Quick Fact: The fear of intercourse or coitus, is also known as coitophobia. 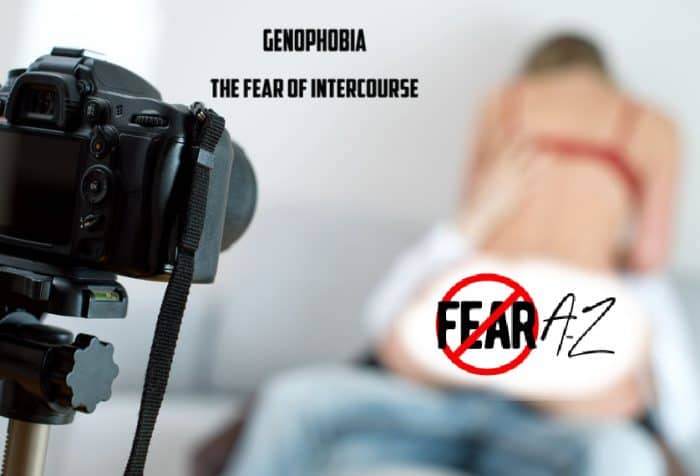 All You Need to Know about Genophobia

Genophobia can be complicated as it affects people in different ways. Genophobia is often referred to as erotophobia or coitophobia. It may be difficult diagnosing genophobia as sufferers feel the same fear and panic that are also shown in other phobias including heterophobia (the fear of the opposite sex) and gymnophobia (fear of nudity).

Genophobia can particularly harm those who are married or in a romantic relationship. Often, it’s not that you dislike the person, you simply can’t show intimacy because of this irrational fear. According to medical resources, the causes of genophobia are unclear. But what is clear is that these causes could be psychological or physical. It can also be a combination of both.

The good news is that like other phobias, genophobia is treatable. Your medical professional will need to identify the components that trigger your phobia. There could be several physical causes. If not, there might be underlying psychological reasons for the phobia.

For example, suffering intense pain during sexual intercourse might be a trigger, as you might not want to repeat the traumatic experience.

On the emotional side, you might be self-conscious of your body, which in turn can trigger anxiety. This can cause you to develop the fear of sexual intimacy, because you fear that you or your partner will no longer enjoy the pleasures of intimacy.

Like other severe phobias, those with genophobia usually have physical symptoms. Common symptoms include:

One cause of genophobia may be religious or societal beliefs. It is said that many religions and societies do not condone sexual intercourse outside of procreation.

Experts say that growing up in a deeply religious family does not necessarily mean you’re going to develop genophobia. However, it may be a contributing factor.

Medical experts further point to ‘performance anxiety’ as another psychological symptom of genophobia. As the term suggests, people sometimes don’t fear sexual intimacy, but fear the thought of failing at intimacy.

How to Overcome Fear of Sexual Intercourse

As mentioned, genophobia is treatable. It is a matter of identifying the root cause to determine the right treatment. The challenge is to specify these root causes. Cognitive behavioral therapy, or CBT, is by far the most preferred treatment for phobias. CBT is a popular way of treating genophobia because of the underlying emotional reasons that might be the cause. However, your doctor might also need to examine if there are underlying physical reasons (trauma, for instance).

If you suffer from genophobia, perhaps the first step in helping yourself is to realize that you do indeed need help. Genophobia, if not treated, can wreak havoc on your social life. It also diminishes your chances of settling down or getting married.

You might also want to learn to relax and convince yourself that this phobia is treatable. Some will suggest learning relaxation techniques, such as breathing exercises or meditation. You might also read up on the power of positive thought.

If you are in a relationship, it might help for you to be very honest with your partner and tell him or her about your condition. This way, you’re not dealing with the phobia alone, and you can count on someone you trust and know to help make the necessary steps to overcome the phobia.

If you’re ready for professional treatment for your genophobia, read on to discover your next steps.

For cognitive behavioral therapy, a counselor or therapist might be able to help you identify the psychological reasons for the phobia. Unlike other phobias, genophobia is truly a sensitive and personal matter. You need to be comfortable with your counselor (or sex therapist) so that your conversations will be fruitful and will hopefully lead to successful treatment.

Your counselor or therapist might suggest ways for you to think about positive intimate experiences instead of focusing on negative ones.

Others might suggest retelling or reliving past traumatic experiences and examining them. This might be counterintuitive, but it is said that this method will allow you to learn more about what is causing your anxiety or panic.

Physical symptoms require different approaches. If your phobia is caused by physical trauma, then medications might be prescribed.

There’s a condition called ‘vaginismus’ which is described as clenching of the vaginal muscles. If this is one of the causes of genophobia, then treating it becomes the priority.

Male sufferers of genophobia might have other underlying conditions such as erectile dysfunction. The shame and embarrassment that might result from this condition is sometimes a cause for developing the phobia.

Post-traumatic stress syndrome or PTSD has also been identified as a cause of genophobia. Abuses in the past may leave an imprint in your mind and thus cause you to develop the fear of being touched, for example. Experiencing physical trauma or abuse doesn’t mean you’re going to develop genophobia. However, these past experiences could be contributing factors.

Genophobia can indeed be a serious condition if left untreated, as it can negatively affect relationships. In some cases, other serious emotional illnesses, such as depression, might also result from having this phobia. You should know that you do not have to battle genophobia alone. With the proper treatment and the support of your loved ones, overcoming genophobia is very possible.