The Intense Fear of Crime

Do you almost shake with fear going out your door at night?

Do you hear a noise outside and get a lump in your throat thinking a burglar may be beyond your door?

Are you always rechecking the locks on windows and doors to ensure they locked?

If so, you may suffer from a fear of crime.

This fear may start innocently but can grow into a full-blown phobia. Fearing crime is normal, but once the fear takes over normal, everyday life it becomes more than just being cautious.

What Is the Fear of Crime?

The fear of crime, known as scelerophobia, is the fear of anything related to crime, individuals of ill will, or burglars. The word is derived from the Latin scelero, which is wickedness, and phobos, which is fear. 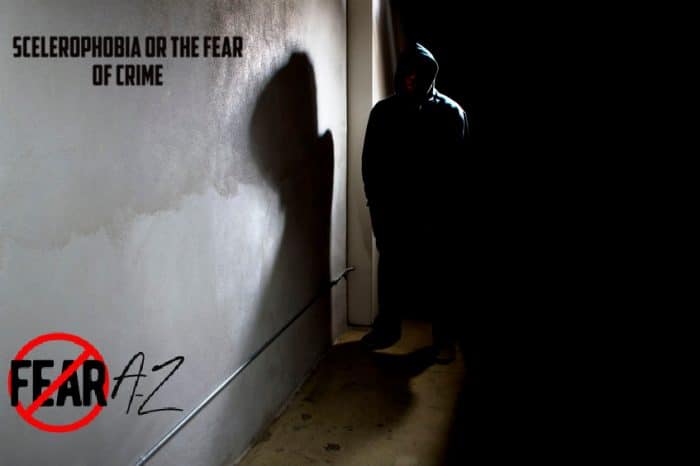 Fearing crime is normal. We see crime every day on the news in our modern society. However, the extent of the fear is what classifies it as a phobia. A person that suffers from scelerophobia becomes exhausted in their belief that they have to be watching over their shoulder at all times to ensure their safety and the safety of their homes and families.

The constant thought of being attacked or an intruder coming into their homes becomes overwhelming. Any new person in their neighborhood could be an assailant. They may believe a co-worker is stalking them, or that every noise outside at night could be a criminal.

What Causes the Fear of Crime?

There are many different factors that can cause scelerophobia, including one’s past experiences, gender, and age.

The fear of violent crime may be more prevalent in women mainly due to the higher possibility of sexual assaults.

Some individuals who have the fear of crime have seen a friend or loved one become a victim of crime. This can lead to them being over-cautious with their own lives. They may check the doors more often, look out the windows all the time, and hide valuables.

Different types of crimes that a person sees or has experienced can lead to different symptoms of scelerophobia such as a break-in, car theft, sexual assault, or a crime that involved a weapon. Each one can lead to hypervigilance, or being overly watchful.

The media, of course, can play a huge role in the fear of crime. When one hears of rapes, teens being shot, or homes being robbed, it seems more likely that these crimes might happen to you.

In most cases, those suffering from an anxiety disorder may also suffer from scelerophobia after hearing reports of crime in their neighborhood.

The fear of crime can cause both physical and psychological symptoms.

Physical Symptoms of Scelerophobia Include:

Psychological Symptoms of the Fear of Crime

The psychological symptoms of crime include: 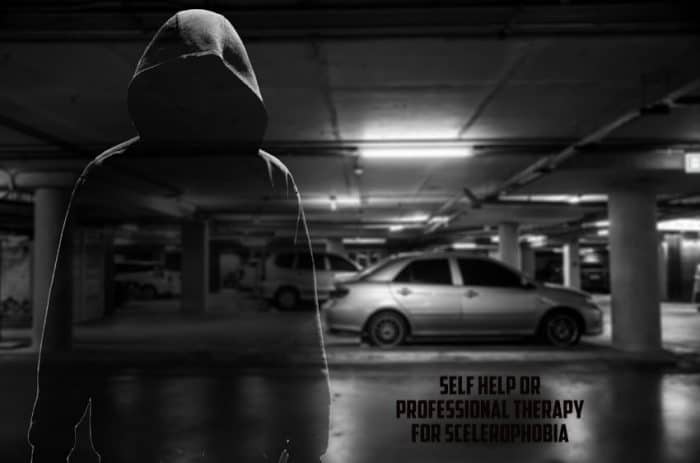 Treatment for the intense fear of crime can start with self-help options, professional therapy, or a mix of therapy and medication treatments.

Self-help: What Can I Do To Help Myself with Scelerophobia

Scelerophobia treatment can be done at home for many, unless the fear is taking over their entire lives. A few of the self-help things to do consider are:

Exercise has been proven to help individuals with a variety of anxiety disorders including scelerophobia.

Cardiovascular exercise is often at the top of the list as it aids in relieving stress.

Weight resistance training as well as aerobic exercise can help as well. Aerobic exercise helps by releasing endorphins which are chemicals in the brain that make us feel good.

Other exercises that might help you with the fear of crime include biking, swimming, walking, skiing, and jogging. For those that love sports, many sports can help with relieving stress such as basketball, racquetball, and tennis.

Yoga is another great option for those suffering from scelerophobia. The main reason is meditation that can help in reducing anxiety. Beginning yoga can help you have a quiet time and not only reduce anxiety but relieve stress which is often at the root of the fear of crime.

Drinking less caffeinated drinks can help with scelerophobia. Caffeine causes the heart to beat faster, our bodies to become tense, and may escalate the flight or fight response. This can lead to panic attacks for those that have fear of crime.

If your fear of crime is interfering with your life, you may wish to seek professional help. There are several different types of therapies that can provide you with some relief.

Cognitive behavioral therapy is often offered for individuals with anxiety disorders. The main goal is to cope with the fear and learn that the fear is irrational. By analyzing your fear of crime, when you begin to feel the fear mounting, you can use the tools learned in therapy to cope with the thoughts. This will help reduce symptoms.

Exposure therapy is also used for anxiety disorders and has helped individuals with scelerophobia. This type of therapy will begin by exposing you to the fear whether in photos or videos. The idea is to help you grow stronger when the feelings mount so you can control the symptoms, including your thoughts and physical symptoms.

The therapist should understand your fear of crime very well and provide the therapy in a safe and controlled environment. The severity of your symptoms will play a huge role in determining if your therapy choice is best for you. If a therapy is not presented correctly, it may make the fear increase.

According to the severity of your symptoms, medications may be prescribed by your physician or therapist. Medications can help relieve symptoms, but without therapy, the fear of crime may not be controlled.

Anti-anxiety meds such as Klonopin, Valium, and Xanax are often prescribed for those with severe scelerophobia. These medications will help prevent panic attacks and are usually provided on an as-needed basis.

Antidepressants are usually prescribed to individuals suffering from depression. However, some patients with anxiety disorders have had success with such medications as Lexapro, Zoloft, and Paxil. Once again, these medications will only help to relieve symptoms.

Simple Tips to Avoiding Your Fear of Crime

You may not be able to completely avoid a fear of crime, however, there are a few tips to help ease your mind.

According to the severity of your fear of crime, there are a few simple things that can be done to help control your fear:

If you have been a victim of a crime, it is best to talk with a counselor and receive proper therapy. Too many times, we blame ourselves for being victims, which can lead to not only scelerophobia but other anxiety disorders.

You can learn to cope with the fear of crime and live a very healthy and productive life.