Autophobia or the Fear of Being Alone: A Guide

We all know that one is the loneliest number, but is that really a phobia?

The short answer is yes.

Do you start to sweat and panic at the thought of being left alone for more than a few hours? Do you need to be around others and when you’re not, your mood is altered significantly?

What is the fear of being alone? The technical name is Autophobia. So if being alone too long causes you physical and mental strain, you may indeed suffer from autophobia.

Other names for autophobia?
Other names include Eremophobia, Monophobia, and Isolophobia

The first step or learning how to overcome fear of being alone is understanding why it afflicts you. Read on and hopefully we can help.

Autophobia is a recognized psychological condition that deals with the fear of being alone.

That said, there is a difference between a basic fear of being alone and autophobia. A fear of being alone may apply in a broad sense to any number of conditions. It is also quite common. According to at least one survey published in HuffPost in 2014, as many as one in three US adults reported being afraid of being alone.

However, the manner in which they articulated that fear was still fairly generalized and not necessarily in keeping with the standardized clinical definition of the condition. 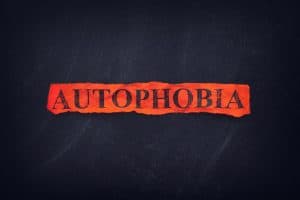 So, what does it mean to have clinical autophobia, and what can you do about it?

As you might have guessed from the name, autophobia—otherwise known as isophobia and monophobia—is the clinical name for the fear of being alone. The names give away something of the nature of this fear, with iso for “isolation” and auto and mono designating “self” or “single.”

When you suffer from a clinical fear of being alone, you typically feel some mixture of isolation. You may feel singled out or different from others, or fear that you will be ignored, left behind, or left alone.

However, there is more to it than that. Autophobia may include a fear of being alone not just through social isolation, but also because of fears of what might happen to you while alone. You might obsess about intruders, burglars, and other evil-doers. Similar catastrophizing of social isolation is another potential aspect of autophobia.

Other feelings associated with autophobia include:

Part of what makes autophobia so hard to deal with is that its precise cause is still unknown.

Even so, there are certain triggers and causes that are characteristic of autophobia, beginning with the perception of a lack of human companionship as a terrifying breach of the environment. The familiar is often comforting for those suffering from a psychological condition or phobia, and autophobia is no exception. The familiarity of other people can be soothing, while the absence of it can be terrifying.

It is important to note that autophobia is a strictly phobic mental health condition, meaning that it is not usually caused by underlying medical factors. That does not mean that the phobia sufferers of autophobia feel isn’t “real,” but rather that it typically does not have a physical component as well. 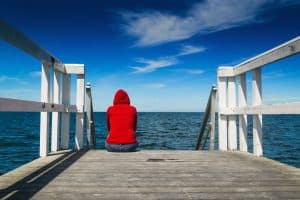 Even when sufferers of autophobia know that their condition is strictly mental, however, they often cannot control their symptoms.

One hypothesis for the formation of this phobia has to do with past traumatic events relating to abandonment. If your parents got a divorce, you were left alone for too long, were not given enough attention, or were otherwise made to feel “abandoned” as a child, those feelings may persist into adulthood in the form of separation anxiety and autophobia.

How do you know if you have autophobia?

Some of the most common symptoms of autophobia include:

Needless to say, those symptoms are highly varied. Most of those symptoms could also be conceivably ascribed to other conditions. As such, you will want to consult with a licensed psychologist, who will be able to review your situation in context and determine if autophobia is indeed the culprit.

One thing to note about autophobia is that it is considered to be a situational phobia. That means that the situations in which you find yourself can either trigger or further exacerbate your condition. If you suffer from this condition, therefore, and find yourself in a position where you are alone or feel ignored, you may inadvertently trigger symptoms.

Your situation, therefore, plays a big role in determining whether you have a fear of being alone, i.e. autophobia, and if so, what can be done about it.

Treating and Living with Autophobia

One of the most important things to recognize about a fear such as autophobia is that it is indeed a valid psychological phobia. You aren’t just imagining it or making things up to be melodramatic, and it isn’t your fault. All of that may seem obvious, but far too often we shame people for their psychological conditions, especially phobias such as a fear of being alone.

When it comes to a fear of being alone phobia, recognition and treatment is critical.

Thankfully, when it comes to overcoming a fear of being alone, you have several options.

One of the most important things to do is to put your phobia into context. Remember, this fear of being alone is situational. That means it can change. Past is not prologue; an isolated or lonely past does not have to be your entire life.

When learning how to get over the fear of being alone, it may be helpful to practice cognitive behavioral therapy. CBT works by rewiring your brain’s associations with certain words and ideas, helping you reprogram your mind around certain mental blocks to arrive at a healthier way of thinking and living. This is a very effective method. According to the National Institute of Mental Health, around 75 percent of patients with specific phobias can see progress with CBT.

Also potentially helpful is exposure therapy, which involves careful controlled exposure to potential triggers of a given phobia. For autophobia, this can involve small, safe, controlled periods of isolation, allowing patients to see that there is nothing to fear by being on their own.

Finally, there are medical options. Beta-blockers, which work to impair the effects of adrenaline on the body, may help calm a patient. The same may be said of benzodiazepines, which can reduce anxiety by acting as a sedative.

However, in most cases, doctors try to avoid prescribing medication for autophobia for fear of causing addiction. It is a situational condition, and so is often best dealt with by dealing with the situation directly. Medication is, therefore, only prescribed in the most serious of cases.

By its very nature, autophobia can leave you feeling isolated and alone.

As this guide shows, however, you are anything but. There is a whole community of fellow patients and medical practitioners waiting to help you.