What Is The Fear Of Bats Called?

Does the sight of bats make you extremely anxious? Do you suffer as Bruce Wayne did as a child before making himself into Batman? Would you go to any lengths to avoid even thinking of bats? Chiroptophobia is the technical fear of bats phobia name, and you may suffer this fear.

Chiroptophobia can cause people to experience strong feelings of anxiety and panic around bats. In extreme cases, the sounds, images, drawings of bats, or even just the mention of bats can trigger this phobia.

A phobia is not the same as fear. It’s much stronger and can sometimes feel like a weight on your chest that you just can’t get off. It’s an overwhelming situation that can cause panic and even disorientation with your surroundings. 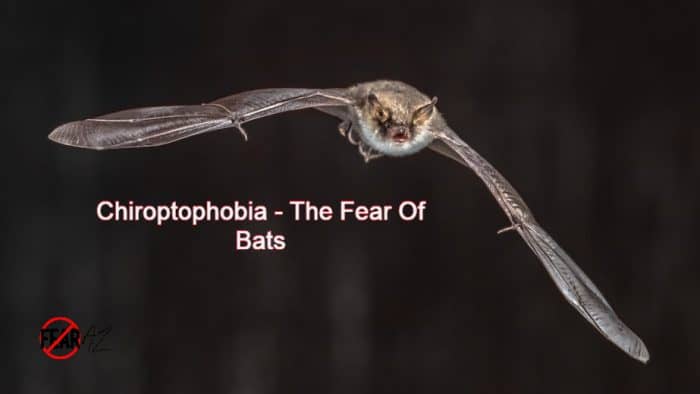 In most cases, the fear of bats tends to stem from misconceptions about bats, some of which may be superstitious.
Did you know that in Medieval Europe, it was considered a bad omen if a bat ever entered your house? It was believed that this was a sign of someone in the family about to die in the near future.

Today, movies and popular culture associate bats with darkness, Halloween, and vampires, which tends to paint a rather gloomy image of bats.
Another possible cause of chiroptophobia, as is the case with most phobias, is a traumatic experience involving bats. You may have had an unpleasant encounter with a bat in the past. Although bat attacks are rare, they can act aggressively if they feel threatened and cornered. The phobia may also stem from a bad dream involving bats.

The Reality About Bats

Bats may be unpleasant-looking creatures, with their beady eyes, fangs, and leathery wings. Bats are also carriers of some serious diseases such as rabies. About 70% of bats only consume insects, which makes them insectivores, a subclass of carnivores. Some bats limit themselves to fruits and nectar from flowers. For some reason, even vegetarian bats seem to have sharp canine fangs. This can make bats look intimidating.

However, they pose no threat to humans, and often just fly away if approached.
There are only three species of bats that feed on blood, and they all reside in Latin America. So unless you’re trekking through the tropics of central or South America, you don’t have to be concerned about bats.

You may simply be disgusted by bats, which is not the same as fear. The way to tell concern or disgust apart from a phobia is by the symptoms a person experiences. If their “concern” or “disgust” is causing them severe anxiety, physical palpitations, and/or breakdowns, they probably suffer from chiroptophobia.
Here is a list of physical and psychological symptoms chiroptophobia is generally diagnosed by:

How to Overcome The Fear of Bats?

First things first, a phobia is nothing to be ashamed of. It’s a completely natural occurrence. Most people suffer from some kind of phobia and are often completely unaware of it.
The good news about chiroptophobia is that it’s not a phobia that necessarily gets in the way of living a normal life, unless you live in an area with a dense population of bats.
However, if your phobia is making you squeamish at the thought of simply going out at night or exploring the wilderness, you should start working on overcoming your fear of bats.

Self Help – What Are The Options?

Chiroptophobia is a relatively straightforward phobia to understand because it’s the fear of something specific rather than a concept like darkness or asymmetry. It’s usually rooted in misconceptions, superstitions, or traumatic past experiences involving bats.

To overcome your phobia, you can brush up a little on your knowledge of bats. Learn more about the different types, their temperaments, habitat, and lifestyle. You’ll be surprised to learn just how many similarities we share as mammalian species. People often fear what they don’t understand.

Knowledge can equip you to better respond to bats if you ever find yourself in a confrontational situation. Not that you should go looking for one, don’t ever try exposure therapy with Chiroptophobia yourself. But reading up about bat behavior can help you know how to not trigger their animal instincts and how to stand your ground. The more information you have, the less likelihood of you being afraid and the more confident you’ll be the next time you accidentally run into a bat.

There are various options for clinical treatment of phobias. The most popular form of treatment for chiroptophobia is cognitive therapy.
This involves talking to a professional psychiatrist/therapist about the feelings you experience and your memories. They assess you based on the information you provide and try to suggest what thinking or behavior patterns you need to change to overcome this fear. It’s a pretty one-track approach and usually only requires 4-10 sessions.

Another interesting treatment for chiroptophobia is hypnotherapy. It focuses on helping people find their inner strength and become independent. This approach tends to have a more holistic outcome since it helps you get rid of your fears by yourself. That is, the therapists help you so that you’re mentally equipped to deal with fear in the long run.

Coping With Chiroptophobia In The Long Term

A question some of you may have at this point is why even bother to treat your intense fear of bats when you can just avoid bats? It’s not just about making you stop fearing bats. Addressing your chiroptophobia will also help you to combat the irrationality of your fear. Learning how to overcome phobias is an important skill. It will allow you to come out a stronger person, capable of maintaining composure in stressful situations.

Any irrational fear can get in the way of living a normal life. That’s why it is necessary to learn to manage fear. So the long-term plan for dealing with any phobia should involve professional treatment and practicing self-help methods.

Final Thoughts
If you’re planning to seek professional help with chiroptophobia, make sure they are well-reputed, licensed, and experienced medical practitioners. Chiroptophobia is a unique phobia so it requires an experienced hand. If you’re in school or college, don’t hesitate to approach your counselor to talk about it. That’s what they’re there for.