Life Is a Rainbow, but Not If You Have a Fear of Colors

Do you avoid large swatches of bright colors?

Perhaps certain colors make you feel uncomfortable or cause physical symptoms to rise up. You may break into a sweat or leave places that are too colorful.

Do you feel disgust when surrounded by too many colors at once?

If that’s the case, then you may suffer from chromophobia, also known as the fear of colors.

This fear of color affects less than 2 percent of people worldwide, including the veteran director, Woody Allen and actor Billy Bob Thornton.

Read on for more about chromophobia meaning and how to tackle it. 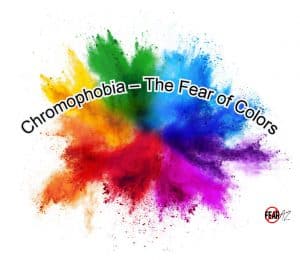 Everything You Need to Know about Chromophobia

What is the fear of colors called? Chromophobia. It is also known as chromatophobia. Understanding this phobia might be hard if you don’t suffer from it. After all, what threats do colors pose?

Some people develop this phobia for specific colors or a range of colors. Woody Allen once opened up about his phobia of bright colors.

Colors act as a metaphor for humans. The phobia of colors may stem from this perception. For example, the color red typically denotes stop, anger and bloodshed while the color white denotes peace, freedom, and death in some cultures.

While this phobia is generally an irrational and conditioned response, there are cases where the phobia is more than just an aversion. It is a case of a clinical phobia.

While many factors cause chromophobia, it is simply a learned response in most cases.

The first cause is culture. This suggests that chromophobia is most likely a result of a person’s upbringing, culture, or religion. To most people, the fear of black, also known as melanophobia, stems from the fact the color black is associated with evil, mourning, and darkness.

Experience and trauma are the second known causes of chromophobia. Many people who have suffered tragedy in their lives may associate a particular color with it. They may be reminded of this tragic event whenever they see this color. For example, if a person is involved in a life-altering accident while driving a green car, they may feel apprehensive and uneasy about the color green.

There is a cinematic depiction of this phobia in the 1964 thriller film, Marnie. In the film, the main character suffers from a fear of red brought on by a childhood trauma.

In some cases, the fear of certain colors is just a result of brain activity and its attributions to displeasing things. Some people associate red with blood and yellow with bees.

Are There Various Forms of Chromophobia?

Yes, there are many forms of this phobia. They are divided into subcategories depending on colors. Some of the types of chromophobia are:

Responses to the fear stimulus differ from person to person. Some people may experience panic attacks, while others may have difficulty performing daily duties or going out in public. Others suffer a milder form of chromophobia which makes them highly reluctant to use certain colors in interior design and fashion. The most common color phobias are xanthophobia and melanophobia. Continue reading to learn about symptoms and treatments options for chromophobia.

Exposure to a stimulus can induce fear and anxiety in a person with a phobia. Chromophobia is a real condition in which a person may go to great lengths to avoid a certain color. This may have an impact on how a person functions, as they may avoid going out with friends, going to work, and even not watching television out of fear. However, in most circumstances, it isn’t a major difficulty unless they come into contact with the color in a specific situation.

Chromophobia is a difficult condition to endure. Before seeking professional help, you can try some self-care to help yourself with your fears.

Self Help – What Can You Do to Help Yourself?

Yoga is the most effective and self-paced treatment for anxiety and phobias. Yoga has numerous advantages, including being one of the most efficient ways of combating anxiety. It boosts mental wellness and teaches good breathing techniques, which are especially helpful for stress induced by phobias. It may also aid in sleeping and relaxation, which may help lower response when confronted with a phobia. Yoga also boosts energy levels and enhances mood. Practicing yoga poses two or three times a week can go a long way in a battle with chromophobia, especially if your phobia keeps you up at night.

Professional Help for the Fear of Color(s) – Options Available

While psychotherapy is one option for overcoming a fear of colors phobia, there are various other options available for chromophobia treatment. It’s easier to get help than it is to learn to live with chromophobia. Going to a therapist will help reduce your anxiety and lessen your fears. Cognitive behavioral therapy (CBT) is a method of dealing with phobias that is therapeutic and effective.

CBT is concerned with a patient’s behaviors, feelings, and thoughts. The involved therapist assists in identifying and dealing with specific difficulties. It is more systematic than other talk therapies and seeks to understand how a person developed their fear, why they behave the way they do, and how they feel when they are vulnerable.

When a therapist encounters a patient with a phobia like chromophobia, the aim is to change their attitude to the phobic stimulus. Exposure therapy is one of the most common treatment methods for phobias. This treatment entails exposing the patient to the phobic element, in this case, color. This is also known as desensitization. This is done deliberately in order to evoke a response from the patient. The goal here is to note a diminishing response to the fear stimulus. For example, someone with a fear of red might be gradually exposed to the color through LED lighting.

Hypnosis could be beneficial too. Although many people are hesitant to undergo hypnosis, in the case of therapy, it is done by a skilled professional. Hypnotherapy is a safe and effective form of treatment that does not attempt to take control of your mind or body. It just assists in allowing you to go deeper into your subconscious to find the root of your fear.

Learning to Cope with Chromophobia

Learning to cope with a phobia is essential, especially if your phobia is something you’ll have to deal with regularly. Seek counseling to help you overcome your anxiety. Next time, you won’t have to worry about all the red merchandise on Valentine’s Day or the green costumes on Saint Patrick’s Day.

Overcoming chromophobia can be very hard, especially if it takes control of your life. It can manifest in many ways. Maybe you’re afraid to visit concerts or even watch TV out of the fear of being exposed to themes with the color you fear. Or maybe you can never buy that obnoxious green wallpaper that your partner loves. So, seek help. Whether you choose the self-care route or try therapy, be consistent. You could also consider a mixed approach. The end goal here is to lessen your fear. And you can if you allow yourself time for treatment.